Now like lots of people I collect stuff, but unlike most I prefer to keep the collections digital. 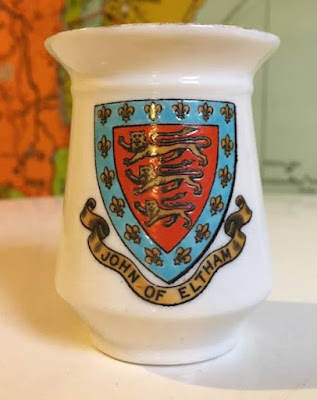 That way there is no need to dust, no danger that you will damage the precious object and no chance that one day Aunt Ethel’s present will end up in the bin or sold on eBay.

It also means that you can collect other people’s favourite items and so share their pleasure.

All of which brings me to crested china which is the a general name for those porcelain “things” bought on holiday as a souvenir and carrying the name, badge or coat of arms of a town, city or seaside resort.

I can’t say I ever bothered with them until I came across a selection made during the Great War ranging from tanks, to battleships ambulance, and war memorials and the result was a series of stories.*

They were turned out in their thousands and each carried a different coat of arms.

It made perfect sense when the majority of people could no longer go on holiday as travel became restricted and ever more expensive. 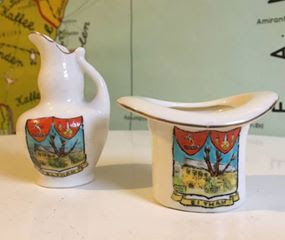 This way the porcelain companies stayed in business, people still had jobs and the war effort and moral were boosted.

That said these three of Eltham from Mark Johnson have as far as I know nothing to do with the Great War, but they are Eltham where I grew up and that is good enough for me.

Although it would be nice to come across one of the Royal Arsenal.