Painting Peckham ......... the ever changing Duke of Sussex 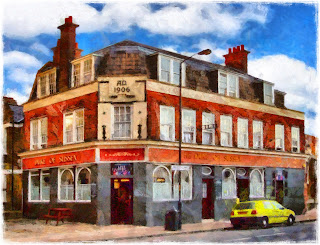 Now it rather looks like Peter has gone off on a new one.

Over the last few weeks he has been painting pubs that have long since ceased to pull a pint.

In one case the pub has become a betting shop and another is now a residential conversion.

But here with the Duke of Sussex on the corner of Friary Road and Commercial Way we are back with one still doing the business although he has captured it as it would have looked around 2008.

Those familiar with it now will notice a few small differences, ranging from the change in the background colour of the signage,  and the addition of benches and railings outside.

Facebook: Paintings from Pictures https://www.facebook.com/paintingsfrompictures
Posted by Andrew Simpson at 02:00