Faces from our past ......... John and Jane Holmes of Jubilee Cottages

Now I remain fascinated by other people’s lives, and when you can put a face to a story so much the better. 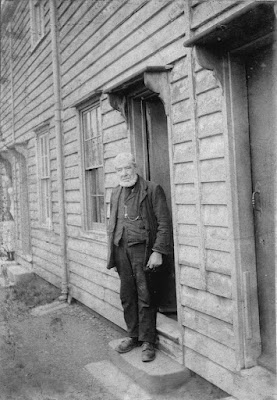 Here are John and Jane Holmes who lived in Jubilee Cottages which were off the High Street, down a narrow ginnel and might almost count as a closed court.

It is a place I have written about in the past*, and also one that Eltham historian Mr John Kennett explored in his article, The Jubilee Cottages, which appeared in SEnine.

Mr and Mrs Holmes appear on the 1881 census and I will have clocked them as I did the preliminary research but of course they were just names, until Steve Elphick, got in touch with his family story.

Like so much family history it is an ongoing project, but here is what Steve has uncovered so far.

"Hi Andrew, have posted the following info about Jubilee Cottages in Eltham, in a comment on your Blog, don't know if it's of any use. Regards, Steve

Incidentally, I worked at Hinds of Eltham from 1970-72, but the cottages had gone by then. However, I think I have a couple of family photos taken at the Cottages; if you're interested. 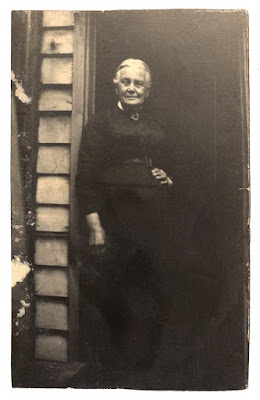 These two shots taken outside the cottage, are of family members but, again, I sadly don't know exactly who they are - possibly the head of the family John and his wife Jane, but that is just guesswork.

As previously mentioned, I worked as a teenager at Hinds of Eltham in the early 70's but, at the time knew nothing of the family link to the area. I also found out later in life that my Grandmother (Hilda Elphick nee Knott), who was Rachel's daughter, worked for F. Hinds in their original Blackheath store .....small world!”

And by his own admission there is lots more to find out but if these are John and Jane Holmes Of Jubilee Cottages then we have a powerful link to our collective past.

*In Jubilee Cottages behind the High Street in the spring of 1851, https://chorltonhistory.blogspot.co.uk/2016/04/in-jubilee-cottages-behind-high-street.html