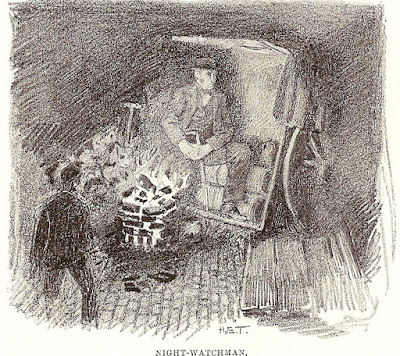 Once the night watchman would have been a familiar sight sitting beside his hut keeping warm at the brazier and maintaining a solitary vigil over the road works or building site.

They feature in much literature during the last two centuries and only disappeared sometime in the 1960s.

Back in 1896 Henry Tidmarsh recorded this one somewhere in the centre of Manchester.

In all he produced over 300 illustrations for the book Manchester Old and New which  was published in 1894 by Cassell with a text by William Arthur Shaw.

In three big volumes it told the history of the city but the real value of the book was in Tidmarsh's vivid depictions of Manchester, with streets and buildings animated with people.

Email ThisBlogThis!Share to TwitterShare to FacebookShare to Pinterest
Labels: Manchester in the 1890s