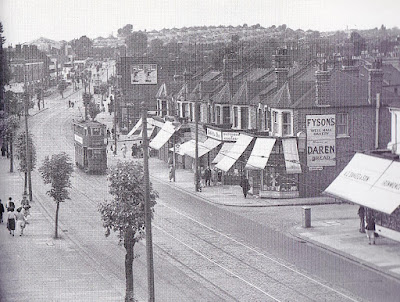 Now this will be the last for a while of pictures of Eltham trams taken from that wonderful book on Eltham and Woolwich Tramways.*

But that said given that there are equally fascinating pictures of Woolwich, Charlton and Lee Green I reckon I will be back.

And one of the reasons is that each of the pictures reveals a lot about how we lived back nearly three quarters of a century ago.

So here is one that will be familiar to many.
We are on the platform of the old Well Hall Station looking down on the parade of shops and taking in the that climb up to the Woods. 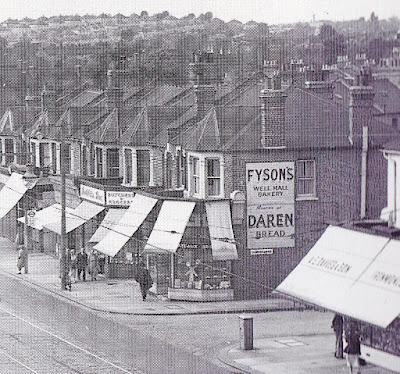 Of course by the time I was making that journey up from the station to 294 Well Hall the trams had long gone but I think the bakery was still there and the scene is not so different today.

That said the last time I looked 24 HOUR MINICABS were now operating from the shop but you can still make out on the side of the building the ghost sign for “Fyson’s Bakery Makers of Daren Bread” which has fared better than the chemist which once occupied the site.**

Or for that matter Daren bread which was a brown loaf popular in the 1930s and 40s which may also have been sold in the old Co-op which is just visible behind the tram.

I missed that Co-op building by a matter of months.  It had opened in 1906 and was demolished in 1964 just as we arrived. 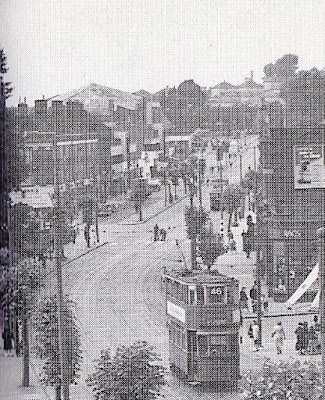 It may still have been there but if so I don’t remember it or its successor being built,

And that is the value of the picture for despite the bits that seem familiar it is a scene which has vanished.

The tram went in the early 50s, the co-op in the 1960s and sadly for me at least the old station two decades later.

Pictures; looking down from Well Hall Station, date unknown, from the collection of E. Course and reproduced from Eltham & Woolwich Tramways, 1996

Email ThisBlogThis!Share to TwitterShare to FacebookShare to Pinterest
Labels: Eltham, Eltham in the 1940s, Eltham Trams, Well Hall, Well Hall in the 1940s