Travelling by tram round the Well Hall Circus 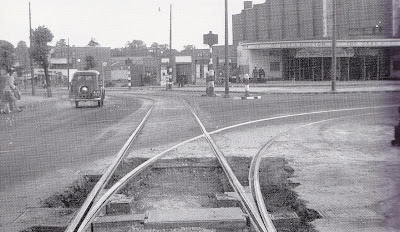 Now I have no idea when this picture was taken.

I do know that it will date from after 1931 when the roundabout was built which according to Eltham and Woolwich Tramways was constructed as part of the Westhorne Avenue extension.*

And if I wanted to be more specific I guess it can be no earlier than 1938 a date which cinema buffs will confirm.

The Odeon was opened in 1936 and of the two films showing that week The Dark Horse was made in 1932 and I’ll give a million six years later.

I can’t say either would have got me walking down from our house.

The Dark Horse was a political comedy starring Bette Davies and turned on the efforts of Ms Davies and others to find a candidate for Governor at the Progressive Party convention and ran through a series of improbable plot lines.

Not to be out done its running mate that week centred around Warner Baxter who played a millionaire saving a tramp from suicide, and then taking the tramps clothes and disappearing with a rumour that he would give a million dollars to anyone who is kind to a tramp.

But perhaps I am being unfair.  I can sit through endless episodes of Coronation Street, have bought at least two DVDs of Downton Abbey and can pretty much quote James T Kirk word for word in all his Star Trek films and plenty of the TV shows.

And having demonstrated my unnerving attention to detail I can offer up the names of all those who occupied the shops stretching down from the cinema to the Pleasaunce when Ms Davies was at the Odeon.** 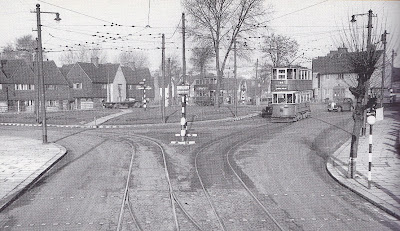 But I am on firmer ground with the second which dates from December 29 1948 and I have to say it doesn’t look so different from when I walked up Well Hall Road in the mid 1960s.

From memory the path across the roundabout had gone, along with the tram poles although I suspect under the tarmac still lurked the tramlines.

And for all I know they may still be there.

Like all good stories I learnt something knew because back in the 1940s our roundabout was, according to the London Transport timetable known as Well Hall Circus.

So that is all I shall say, except to thank Middleton Press for giving me permission to reproduce the pictures from their book Eltham and Woolwich Tramways and promise you more later. 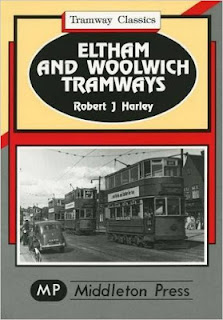 Oh and a thank you to Tricia Leslie who first came across the pictures and posted them and then introduced me to the tram book.

Pictures; Arriving at the Well Odeon,  circa 1938, A J Watkins, and Well hall Circus, 1948, H B Priestley reproduced from Eltham and Woolwich Tramways

** A car, a row of shops and a little bit more is revealed about the history of Well Hall Road, http://chorltonhistory.blogspot.co.uk/2015/09/a-car-row-of-shops-and-liitle-bit-more.html