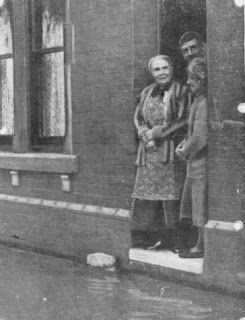 I have been drawn back to the Derby flood of 1932, and in particular the suffering any such disaster brings.*

On that Sunday morning most were taken unawares and as ever those who lost the most were those who could not afford to.  Many families in the low lying areas lost everything and without insurance cover this was a real catastrophe.

Opposite; families in the Chester Green Road, watch the rising flood water, while the Lord Mayor made a flood appeal.

Pictures; from Souvenir of the Derby Floods In Aid of the Lord Mayor Flood Fund, May 1932 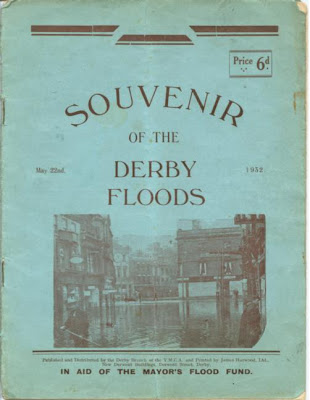 Posted by Andrew Simpson at 03:34 No comments:

Email ThisBlogThis!Share to TwitterShare to FacebookShare to Pinterest
Labels: Derby, Derby in the 1930s

Down on the Kent coast at the seaside in the 1930s 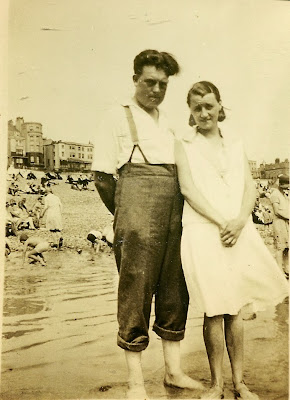 Now for reasons I won’t go into I never went on holiday to the seaside as a child.

Apart from one disastrous day at Dover waiting to meet my dad off the ferry with a coach load of returning tourists my summer holidays were spent with my grandparents in Derby.

Sand, sea under a Greek sun would be years away, but for those who could do the yearly break at a resort on the coast was a must.

So I am back with some old photographs of the way we used to do it during the middle decades of the last century.

In many parts of the country most of the factories would shut down for Wakes week and on mass it seemed large parts of our towns and cities exchanged grubby streets and noisy factories for the fresh sea air, fish and chips on the pier and the dreaded landlady.

Those who worked together, got on the same trains and went to the same holiday destinations. So much so that places like Blackpool talked of Glaswegian week and the beaches, trams and pubs would echo to the different accents of the different Lancashire mill towns throughout the summer.

All of which is a lead in to these two photographs of Harold and Alma Morris somewhere by the sea in Kent. 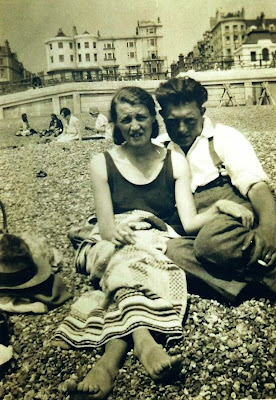 Both in their different way capture perfectly what those holidays were like.  Paddling in the water was just that with the trousers rolled up a smile for the camera and that knotted handkerchief, less a parody on more a reality.

And of course at some stage that pose on the shingles, prepared for a heat wave but mindful that even in June a British summer can prove a tad cold. Alma stares back at us with her towel over her legs, less a modest pose and more I suspect a necessity.

The other thing that strikes you are the cigarettes, this was after the period when most people smoked, when men’s fingers were stained yellow with nicotine and the upstairs on the bus offered up a dense cloud especially first thing in the morning.

I don’t pretend that these pictures are unique but these are less often seen than perhaps was once the case and they capture a way of leisure that has changed.

Many resorts couldn’t cope with the competition from cheap package holidays to destinations where the sun was guaranteed, and are now pale shadows of their former selves; others like Blackpool have reinvented themselves as the place you go for a weekend away or that all important stag or hen night.

So I am pleased Jean shared these pictures of her uncle Harold and aunt Alma doing the week by the sea.

Pictures; from the collection of Jean Gammons.
Posted by Andrew Simpson at 03:30 2 comments:

Email ThisBlogThis!Share to TwitterShare to FacebookShare to Pinterest
Labels: Eltham, Eltham in the 1930s, Harold and Alma Morris, Welling

Four things to do with a closed Chorlton supermarket

Now I concede that the story is about just one way to use a disused supermarket, but in that mix of entrepreneurial flair and total disregard for the environment it has been done three times. I don’t approve of fly posting, and while it might brighten up an empty site, all too often it is blatant misuse of someone else’s property, a headache for the owner and ultimately becomes shabby and forlorn.

More so when bits of the wall/window/doors are over posted, creating a jumbly confusing mess.

But then the historian in me can look back at photographs of said messes and track a bit of history, and of course fly posting has always been with us.

The Romans advertised gladiator contests as well offering up the names of election candidates along with their promises, awhile the Victorians and Edwardians did more than their fair share. 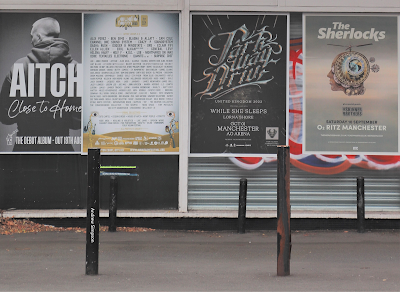 These come from what was once the Co-op on Barlow Moo Road, and before that a Hanbury’s a Tesco, a workshop and at the very beginning a cinema. 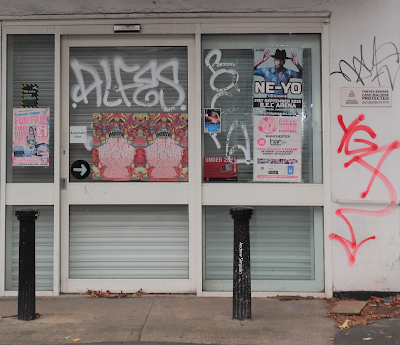 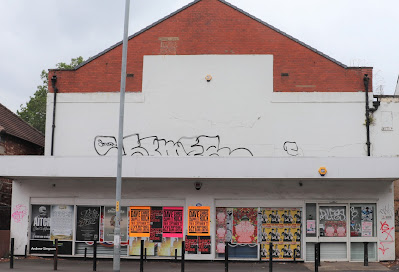 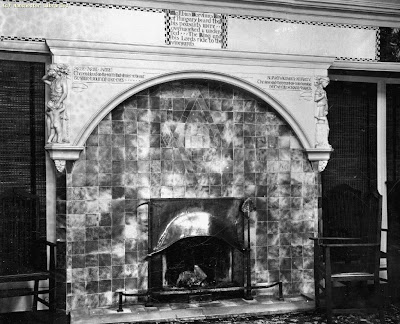 Yesterday I introduced the Clarion Cafe which was on Market Street and was opened by Robert Blatchford on Saturday 31st October 1908.

It was a place I had no idea had existed, but must have been a pretty impressive place.

And so with that ever present wish to bring the forgotten past alive here are some pictures of the interior of the place from when it was opened in 1908. 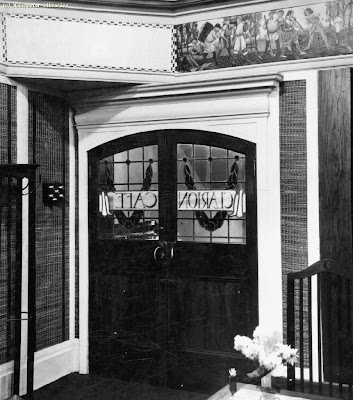 Posted by Andrew Simpson at 03:00 No comments:

Email ThisBlogThis!Share to TwitterShare to FacebookShare to Pinterest
Labels: Alternative histories, Manchester in the 1900s, The Clarion Cafe, The Clarion Cyclist Club

A new history of Chorlton in just 20 objects number 7, ……. the Victorian post box with something special

Now I have decided to return to the series which tells the story of Chorlton-cum-Hardy in  a collection of objects. 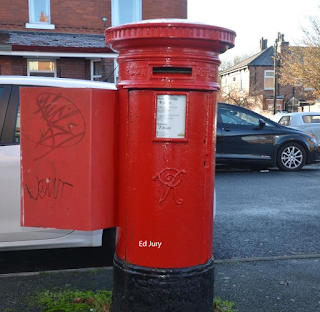 A long time ago I ran the first series of 20 objects and returned a few years later with a second instalment.

And today Ed Jury has set me off again with his picture of a Victorian post box which he saw while  “walking along Ivy Green Road and noticed the post box outside the corner shop was from the Victorian era.

On closer examination I saw the B&W information plate gave the address of the former Post Office in Beech Road”.

Which is all well and good, and very useful, were it not that the Beech Road Post office closed in 2005, ending a presence which went back a century, and more.

There will still be many who remember it, but memories fade, and there will come a time when it will be forgotten. 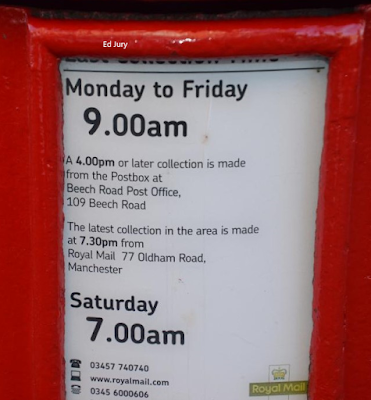 Leaving some future historian to fasten on perhaps the only record locally of its existence, unless of course Royal Mail come and update the information.

But for all those about to go off on the search of the century, I have to advise caution, because my old friend David Harrop who is an expert on things posty, tells me "Post boxes always keep their names, as in  Beech Road post office. Just helps with the admin as there are so many."

Well, no negligence on the part of Royal Mail then.

Picture; the post box on Ivy Green, 2020, from the collection of Ed Jury

Email ThisBlogThis!Share to TwitterShare to FacebookShare to Pinterest
Labels: A story of Chorlton in 20 objects

A short series reflecting on a bit of gentle fun from the seaside. 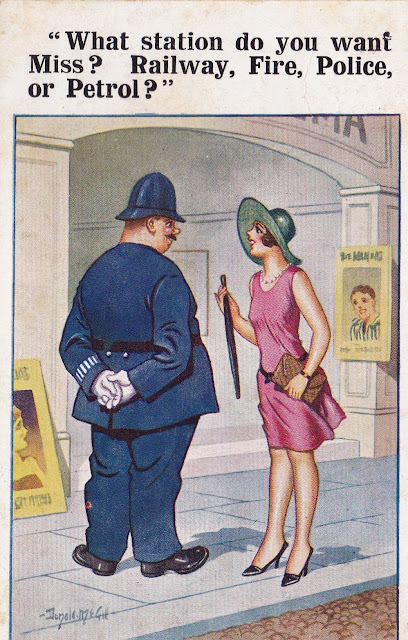 Location; at the seaside in Wales

Picture; courtesy of Ron Stubley
Posted by Andrew Simpson at 02:30 No comments:

A bit of history ….. the new book on Chorlton ..... and an appreciative audience

Now if you are going to have a second launch of a new book on Chorlton, there is no where better than Chorlton Good Neighbours.*

After all its members have lived here for a long time and will have heaps of fond memories and more than a few stories.

And so, it was when we spoke to them at their coffee morning today.

Over 40 turned up to hear us talk about the second in our series on “nothing to do in Chorlton Martledge Lost and Found”.**

Martledge is the old name for the area stretching from the Four Banks to the library and out to Longford Park.

Of course, the term the Four Banks has itself now slipped into the past, but there were plenty there who remembered it as Kemp’s Corner, and one who told me that just before her dad died he confessed he had played the piano in the Savoy Cinema on Manchester Road accompanying the silent movies. 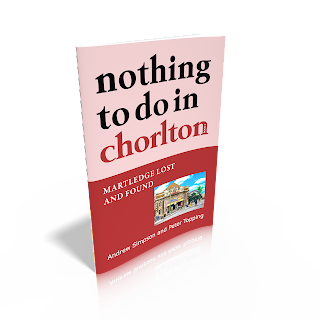 The book, "nothing to do in chorlton, Martlege Lost and Found" by Andrew Simpson & Peter Topping, costs £5, is available from Chorlton Bookshop or from us at  www.pubbooks.co.uk

Pictures; Gathering in expectation of the talk, 2022, from the collection of Andrew Simpson

**A new book on nothing to do in chorlton, https://chorltonhistory.blogspot.com/search/label/A%20new%20book%20on%20doing%20nothing%20in%20Chorlton

Posted by Andrew Simpson at 12:51 No comments: