When plastic bowls and a picture of San Francisco were a must ........ back at “Kingy”

Now I make no apology at returning to Kingspot. 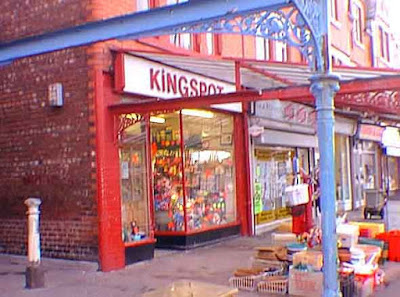 If you are of a certain age and that pretty much covers everyone in Chorlton, you will remember Kingspot.

And for those who moved in after the shop closed here are two more pictures of what was an institution.

I wrote about it yesterday reflecting that “it was just one of those places we took for granted and long before Pound Shops it was somewhere you could get a bargain.

Here could be found everything from washing pegs, to happy colourful toys and that fabulous print of the San Francisco Bridge at sunset.

Much of what was on offer was plastic and sometimes I wondered whether they had their own plastic factory somewhere east of Hong Kong. 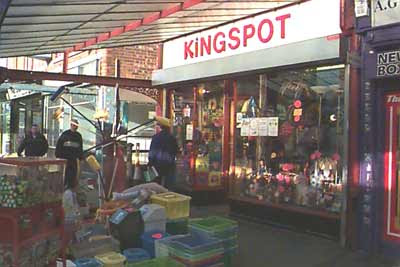 So it was no surprise that Kingspot was always full and getting round the shop could be a challenge which often involved avoiding the buggies, and shopping trollies as you worked you way down the two isles looking for a washing up bowl and ending up instead with two plastic imitation Flying Ducks to hang above the plastic water fountain.

Our kids always seemed to be in their usually when the latest craze for BB guns hit Chorlton which I suspect followed a few days after a new consignment of cheap toys had arrived from China."

And no sooner had I posted the story than  Bernard sent over two of his own pictures adding that "here are a couple of photos of Kingspot I took, I think it was Marhch1998,from data on photo. Maybe you could add them to your Kingspot blog."

Which of course I could and did.

Pictures; Kingspot, 1998, from the collection of Bernard Leach