What did you do at Peterloo?

Now anyone who is interested in the events of Peterloo, and can track their family back to Greater Manchester in the early 19th century will have wondered if one of their’s was at Peterloo.

The names of many of those who were have long been in the public records, trawled over by historians, students and the curious.

But now findmypast has made it easier, by an online database, which allows you to glance down the 1,180 people contained in a list of witnesses and casualties.

“Each record includes a transcript of the vital information about the individual and their involvement at Peterloo. The amount of information you can find can vary, but most transcripts will include, a name, gender, an occupation, residency, which can include a street address, and whether they were wounded or died”.*

I remain hopeful that amongst the thousands who congregated in St Peters Fields, I will come across one from Chorlton-cum-Hardy, and I have come, close, with one from Fallowfield, another from Withington, and four from Stretford, all of whom appear on the list.

Sadly the database has not provided me with such a name.  But I know that a Mary War of Fallowfield was there and needed “White dress used for bandages…….. [and] Suffered psychologically and was committed to an asylum” and that William Batson/Bateson from Rusholme was wounded, sustaining bruising of the chest from “the pressure of the crowd”.

While from Stretford there was Parker Risinghill who was a butcher, and George Derbyshire who was a shop keeper.

Most intriguing was Robert Feilden/Fielden, from Withington, an individual who I suspect most of us will have less time for, given that he was one of the magistrates, and lived in Withington Lodge.

For me the real attraction of the lists are that they hold out the potential for further research, with the possibility that many can be tracked through directories, census returns and other records.

I know for instance that Mary Pritchard who was “beaten by constables, when escaping from the hustings” was a member of the Manchester Female Reform Society and lived at 3 Comet Street, Beswick Square, and that Edward Lancaster who received a  “sabre cut on the back of his head, had his throat trodden on by a horse, had to be carried insensible to the Infirmary”, lived at 9 Potter’s Building, on Oxford Road.

Each will have a story, and in the absence of a Chorlton name I shall cast my net wide, beginning with  Mary Ashcroft who lived at 10 Griffith’s Court off Chapel Street in Salford. 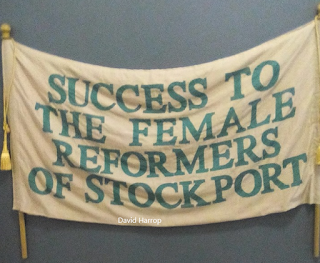