Looking out of Chorlton, the old road in 1930 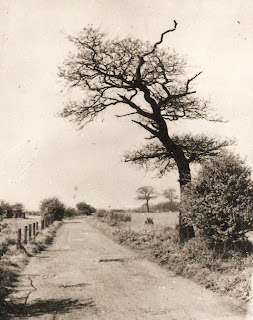 I am back on the old road for the last picture in the series, and we are on the border of the township.*

Today this means nothing but back in the 19th century this was where Chorlton ran out.  Looking down the lane to right was Hawthorn Field which was the only arable field along this part of the old road and a little behind us and on our right was Sally’s Hole.  This according to tradition was where Sally had drowned, not that this deterred the young of the village from playing there or their parents from using it as a tip for unwanted items.  This was a state of affairs which finally resulted in it being filled in sometime in the late 1960s.

The date of the picture is 1930 and it is almost impossible today to place this scene along that last stretch of the lane.  Back then it you  look out on the open fields which were still under cultivation.  Now the same view is obscured by trees and bushes behind which are the foot ball pitches of Turn Moss  the managed brush land which is the modern meadows.

But just a little of what it had been like is firmly still planted in living memory.  My old friends Oliver Bailey and Tony Walker remembered bike rides along the lane, looking for berries in the hedgerows and long uninterrupted days with not an adult in sight.

Picture; by T.Turner the Lloyd collection

Email ThisBlogThis!Share to TwitterShare to FacebookShare to Pinterest
Labels: The Meadows, The Old Road