A Beech Road that has now passed out of living memory 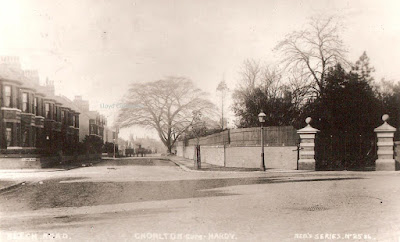 Now I have a soft spot for Beech Road, it is after all where I have lived since 1976.

And for years I wondered why the pavement widens briefly almost opposite Reeves Road which was of course to accommodate the big tree.

What I also like about the photograph is that it is a view that has long since passed out of living memory and part at least had not changed in perhaps 80 years. 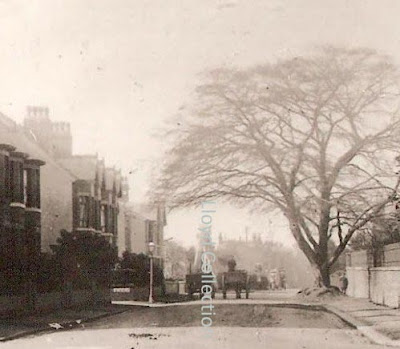 I can be fairly sure that it dates from 1907 when the houses on the left were built and no later than 1909 when the estate of Beech House on the right was sold and the big house demolished.

Beech House had been the home of the Holt family from the 1830s until the last of the family died in 1907. By 1909 the eastern side of the garden running along Barlow Moor Road had been acquired by the Corporation, its wall demolished and a stretch of it was about to become the tram terminus.

The remaining stretch would in time be developed to include Malton Avenue the Palais de Luxe cinema opened in 1915 and the parade of shops.

But now on that winter day it was still possible to see the outline of Beech House and beyond the row of terraced houses to the south were the Bowling Green Farm and the village.