A house in Whalley Range ....... the start of a search for its history

This is Doenberg on the corner of Wood Road and College Road and as you would expect there is a story.

It was built in 1898 by Robert Rohleder and “was the first house in the district to be equipped with electric light, and the first to be connected with the Chorlton telephone exchange  [and] had been built largely according to his own design.”*

It contained “some notable stained glass windows” and a garden which Mr Rohleder had "spent thousands of pounds upon”* converting  from an empty field into something quite impressive.

Sadly the stained glass is no more and the property has been converted into flats.  I would like to have seen the glass but am pleased that the house has been saved.

All too often in the last forty years a developer would just have pulled it down or gone for the bed sit option.

Now I have nothing against bed sits I spent my fair share of time in them during the early 1970s as a student.

The best were cheap and cheerful but many suffered from negligent landlords who only appeared once a week to collect the rent, might employ a cleaner and whose concept of decoration involved once painting over the floral wall paper with watered down emulsion paint.

I know, I did enough of these over the years.  The only heating was what you provided, the rooms were often musty if not damp and the cold forlorn hall was a dumping ground for letters from tenants who were long gone.

This I suspect could have been the fate of Doenberg which may have lain empty for a while and may also have been a children’s home.

This I have yet to find out about.

What I do know is that in 1934 it was purchased by Church to become the new home of the Dean of Manchester who had decided to leave the deanery in Bury New Road which was too expensive to run.

Mr Rohleder moved to 1 Rowsley Avenue in West Didsbury where he stayed till his death in 1945.

I suspect that Doenberg was just too big.

His son by then was in Sale and the slightly smaller Didsbury house made sense.

I think I would like to have known Robert Rohleder.  He had been born in Germany in 1871, became a British subject in 1896 having married his wife three years earlier.

Now I can’t be sure when he came to this country but he was here by 1891, living in Salford and described himself as a clerk in a cotton goods.

A decade later he was running a business making umbrellas and was living in Wood Road.

In 1924 he was unsuccessful in bringing a claim against J.Kendall and Co Ltd London forwarding agents,  for the loss by fire of 82 cases of umbrella frames  for £1,804, and in the July of 1929 travelled to South America returning a month later.

There will be more which in time will throw light on what happened to the property from 1934 till its conversion into flats and perhaps something more about his family.

His son had joined the army in December 1915 went south to Woolwich and was assigned to the Royal Horse Artillery but was discharged in April of the following year.

There are references to his family in the late 1950s and early 60s but they are not linked to our house and so will sit in the shadows.

In the meantime there are a few avenues still to go down and as they say I shall be back. 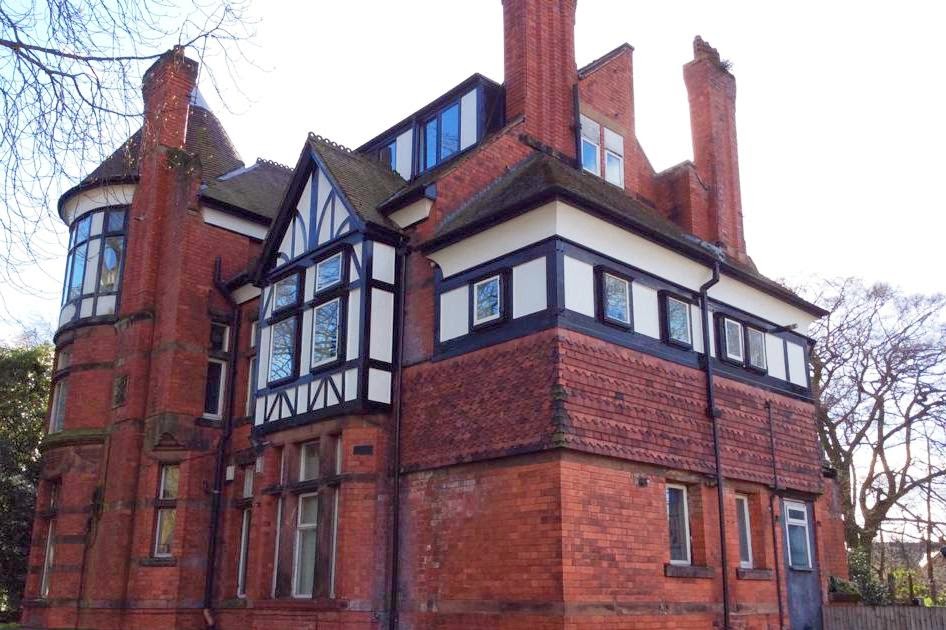 All of which leaves me reflecting that the search started yesterday when Sylvia asked me if I knew anything about the house, supplied with some pictures and the rest just happened from there.

And just after this was posted, Wayne Cleworth dug up a link to a whole set of images relating to Dohenberg and Mr Rohleder’s family.

The collection of 71 photographs includes pictures, “ommissioned by Robert Rohleder from the photographer Percy Guttenberg, 10 St. Ann's Square, Manchester in 1899 when ‘Doenberg’ was completed.

At some stage the prints were bound into a red leather album with the words ‘Doenberg, Whalley Range, Manchester’ tooled in gold lettering on the front. Inside front cover along spine: A Megson & Son, Manchester."

Nor is that all because Gordon Howe has responded "I can confirm that the house was indeed a children's home called Cambrian House when I lived next door from 1978-82."

And the rest of that story will follow tomorrow.  You just can't stop history

Picture’s; courtesy of Sylvia Waltering, and OS from 1934