Today I came back to In Our Times, that excellent Radio 4 programme which for forty or so minutes, offers up an insight into a topic with the help of four experts. 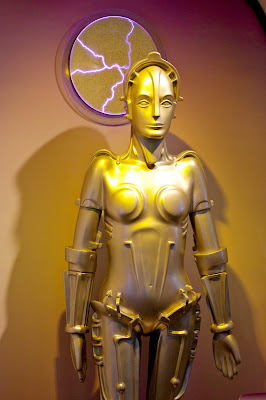 The programmes can range over science, literature and my own favourite, an episode with an historical slant.

And today, it was on Automata, which involved

“Melvyn Bragg and guests discussing the history of real and imagined machines that appear to be living, and the questions they raise about life and creation.

Even in myth they are made by humas, not born.

The classical Greeks built some and designed others, but the knowledge of how to make automata and the principles behind them was lost in the Latin Christian West, remaining in the Greek-speaking and Arabic-speaking world. Western travellers to those regions struggled to explain what they saw, attributing magical powers.

The advance of clockwork raised further questions about what was distinctly human, prompting Hobbes to argue that humans were sophisticated machines, an argument explored in the Enlightenment and beyond. 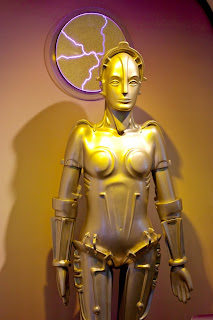 And that allowed me to wallow in the film Metropolis which is one of my favourite silent films and explores issues of industrialization, its impact on the workforce and so much more.

And there is a link between Automata and the image of the character, Maria from the film, but of saying more, you will have to go off and watch it and then  make the connection with Automata.

Picture; Replica of the character Maria from Metropolis. This image is freely available under the Creative Commons,  Attribution-ShareAlike license, Date 8 March 2011, Source Maria from the film Metropolis, on display at the Robot Hall of Fame, Author Jiuguang Wang from Pittsburgh, Pennsylvania, United States

Email ThisBlogThis!Share to TwitterShare to FacebookShare to Pinterest
Labels: In our time, One to listen to