Who was J Montgomery? Another chance to read an old story 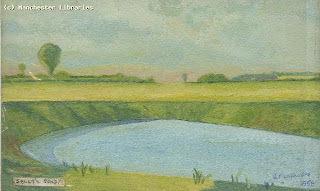 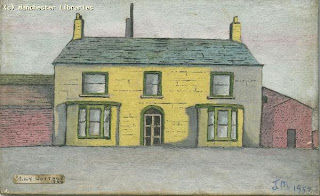 From the late 1940s through to the late 60s an artist called J Montgomery painted Chorlton.

Almost all the pictures were composed from photographs many of which have not survived which means his paintings record images now lost to us.

Sally’s Field painted in 1945 contained the pond where tradition had it that a woman drowned was filled in during the late 1960s. Today the site is surrounded by trees and makes for a dismal place even in summer.

Other places now lost include the old Rivoli cinema and the building on Beech Road demolished to make way for a block of shops and flats. This last picture records a building which may date back to the early 19th century and whose owners gave their name to a pond which stretched from Acres Road along Beech Road up to Chequers Road.

Over 138 are lodged in the digital collection of pictures held by Manchester Archives and Local History Library who hold the copyright and can be viewed on line.

But no one knows anything more about him. Manchester Libraries cannot trace the originals and have no information about him, although there is one reference in a catalogue found by Trafford Libraries. The only other listing comes from the 1961 telephone directory which lists a J. Montgomery in Didsbury and an H. Montgomery in Vicars Road.

And there the mystery begins.

Email ThisBlogThis!Share to TwitterShare to FacebookShare to Pinterest
Labels: Chorlton artists and photographers