Of the farmers who took British Home Children


I am looking at an indenture form between Robert and Ellen Bilborough-Wallace and the Marchmont Home in Belleville, Ontario for sometime in the 1890s. 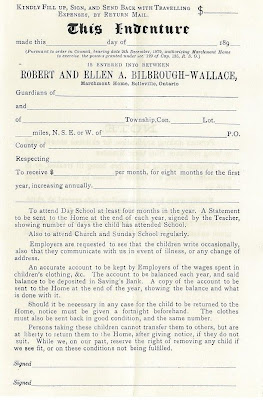 Anyone familiar with the placement of British Home Children will have seen such a document. It is only a little different from the one filled in by Saye Verner Griffith in the February of 1914 when he agreed to take my great uncle.

On the surface these are reassuring.  Here laid out in pretty precise details are the requirements put on the farmer who agreed to take the child and in some cases the role of the placing home should things go wrong.

Regular reports on the health and education were to be submitted to the placement home along with “an accurate account to be kept by Employers of the wages spent in children’s clothing.  The account to be balanced each year, and the said balance to be deposited in Saving’s Bank.  A copy of the account to be sent to the Home, at the end of the year, showing the balance and what is done with it.”

And “employers are requested to see that the children write occasionally, [and] communicate with us in the event of illness or change of address.”** 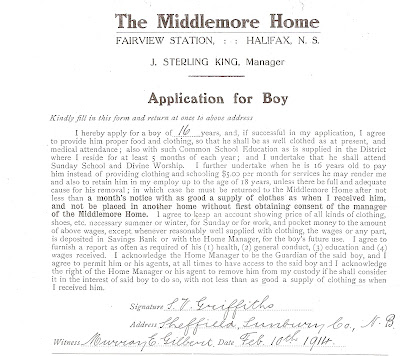 For children like my great uncle who were over the age of 16 there was the further stipulation that they should “pay him instead of providing clothing and schooling $5.00 per month for services he may render and also to retain him in employ to the age of 18”***

Of course the realities of working on a farm in a remote part of Canada did sometimes fall short of the promises made in the contracts.  Children were exploited, neglected and in some cases suffered abuse and experienced harsh working conditions.

But there were success stories like Tom and Frances who were sent separately from Manchester in the first decade of the last century, met and married in Canada and made a go of it or Jesse, “who married his employee’s daughter, had four children and went on to own 275 acres of land and a motor car. He was a Trustee of the church, a member of the Township Council and President of the local cheese board.”**** 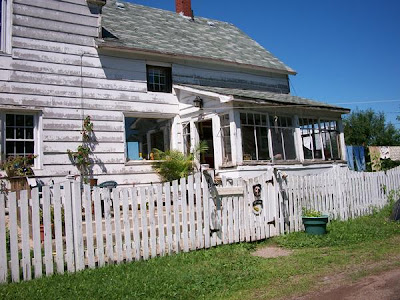 All of which are increasingly well documented, and so over the next few weeks I want to explore the economics behind the employment of BHC on the farms and above all the role of the farmers who took the children on.

Some were certainly the villains of the piece who could be cruel, hard or worse.  My own great uncle who was no saint appears to have been wrongly accused of plotting arson by old Saye Verner Griffith who I suspect just didn’t like him.

On the other hand there was Mrs Lottie Moffat who undertook to pay $3.00 over the going rate for my great uncle and while she too asked for his removal because he was “lazy” and found it “impossible to get him to do anything” was gracious enough to write that “he is even tempered, good to the children, kind to animals, a great reader, does not run around and is quiet and morally good, which is a great item.”

It will be a journey which should reveal something of how farming was conducted during the period, the relationship between the farmers and the children and the degree to which this was a system of exploitation.

Pictures; indenture circa 1890, courtesy of the Together Trust, application to Middlemore from the collection of Andrew Simpson, and the farmhouse of Saye Verner Griffith by Angela Faubert