Westonby on Edge Lane and a mystery 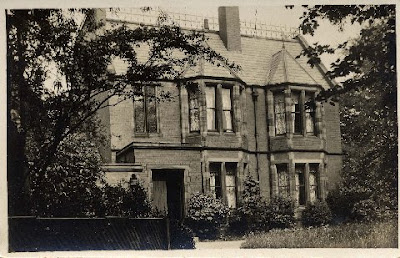 Yesterday I returned to the story of Westonby on Edge Lane, and in the way of things it has blossomed into two stories.

So I shall start in 1923 with the birth of Winifred Constance Sheila Healy born to Francis Joseph and Catherine Maud Healy, nee McDonnell which is really how I came again to visit this house on the edge of Chorlton.

Her daughter had come across the Westonby story and wondered what more we might find out about the house and her mother’s early life and not for the first time it led off in all sorts of directions.

Sheila Healy as she was known was born at Westonby in April 1923 but therein lies the mystery because her parents came from Trafford Park, and it was in Trafford Park where her mother died just four months after the birth.

They had been married in 1920 at St Antony's Catholic Church on Fourth Street, Trafford Park and had lived on Eleventh Street.  Looking at a picture of Eleventh Street from 1910 it is a world away from the large Edwardian house which was Westonby set in its own grounds and overlooking fields. 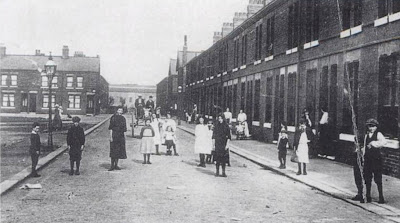 Fourth Street and Eleventh Street were part of an industrial community built by the British Westinghouse Electric Company for its workers.  It was laid out “on the American style grid system of avenues and streets and had shops, eating rooms, a dance hall, schools, a church and a cinema.”*

Sheila’s mother was working for Westinghouse in 1911 and it may have been there in the electric works that she met Francis who gave his occupation as an “electrical and mechanical engineer” in 1920.

All of which begs the question of how Sheila came to be born in Westonby.  The answer will lie in the street directories which may reveal a changed use for the property.  Large buildings like Westonby were not as economic to run as they had been before the Great War and it may have become a small private hospital or nursing home.  It may even be that there is a link with Westinghouse who were regarded as “progressive employers”** and so could have funded a small hospital. 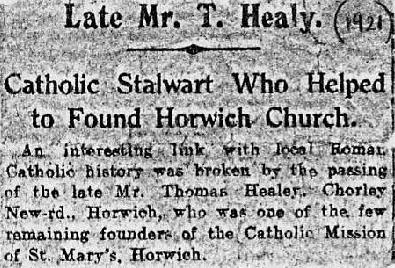 And that pretty much severs the link at present between Sheila and Westonby.  With the death of her mother Catherine more usually known as Kitty, Sheila was “raised by her grandparents Thomas & Margaret Healy in Chorley and Horwich. They came to England from Ballyfermoyle, Co. Roscommon, Ireland in the early 1880s and Thomas was one of the founders of St Mary's Catholic Church, Horwich,” which predated our own Catholic chapel by just eight years.

This was St Peter on Barlow Moor Road which was replaced by the now familiar church of St John on High Lane in 1927.

I doubt that there is any connection but there might be and so along with a search of the street directories for the early 1920s there may be something amongst the church records.

Pictures; Eleventh Street, 1910 from Wikipedia Commons, and Westonby and newspaper extract from the collection of Averil Kovacs

**As early as 1869 the American parent company had introduced a 9 hour day provided adequate housing for its workforce, as well as educational and cultural facilities and insurance schemes, Working Conditions in the Westinghouse Works,  http://memory.loc.gov/ammem/papr/west/westcond.html