One hundred years of one house in Chorlton, ........ Part 11 cooking on gas and electricity around the home

The continuing story of the house Joe and Mary Ann Scott lived in for over fifty years and the families that have lived here since.

I have a confession. One hundred years of one house in Chorlton should read 93 years or there about. But more about that later.
The date is important and perhaps explains why there are no gas light fittings in our house. Just across the Brook the Chorltonville estate built a hundred years ago had gas lighting. It always seemed odd to me that if our house were the same age we too should have had gas lighting.

I had always thought that this was because Joe had seen the future and it was electricity but now I am not so sure and I have gone back to thinking the space in the kitchen with its chimney above must have been a range. It would have had one or more ovens and hot plates. After all until the mid 1970s the old brick and metal copper for heating water for washing the clothes was still in the cellar.

But I do think Joe and Marry Ann would have moved into gas cookers fairly early on. Gas cookers had become increasingly popular from the 1880s and Manchester Corporation through its Gas Committees had pioneered rental schemes from 1884. In 1935 they had showrooms at 140 Deansgate and 116 Wilmslow Road, and I guess Joe and Mary Ann would have had one as soon as they could and may even have installed one when the house was built. The design of the more basic models is little different from today, with an oven which could take 4 shelf settings, a top with the gas rings and a toaster above that.

In 1929 the Gas Committee had sold five and half thousand cookers and rented out another 1,798.* It may even be that the cooker which still stood in the kitchen in 1975 was the one the Scott’s had purchased.
But for many electricity was the coming thing. It was marketed as clean, new and the thing of the future. But few in the 1920s and 30s could have foreseen the number of things which would be run off electricity especially in the kitchen, all of which might need a power point.

I have to admit we are a little excessive; there are twenty power points around the kitchen. Some languish abandoned after a redesign but most are used and on a busy day with the kettle, toaster and microwave in use, plus the radio and a lap top the over abundant provision seems less so. Indeed with another taken up by the fridge freezer this leaves just nine to power the steamer, blender and food processor, along with other electronic kitchen gadgets which might come into play. So, no double adaptors here.

And that I suppose is the point, I doubt that Mary Ann used many tools which needed electricity. It was and I remember this from the 1950s possible to power some things including an electric iron with an adaptor run from a light fitting.

After the cooker the two household items which have made housework lighter are the Hoover and the electric iron. Beating rugs in the open air and sweeping carpets was hard manual labour and so the development of the carpet sweeper, and then a manual vacuum cleaner was important. The first manual models using bellows came in the 1860s.

Although they were lightweight and compact they were difficult to operate because of the need to turn a hand crank at the same time as pushing it across the floor. The first motorised vacuum cleaner was invented in 1901 but I guess it would have been well into the twentieth century before there was one here in 41. 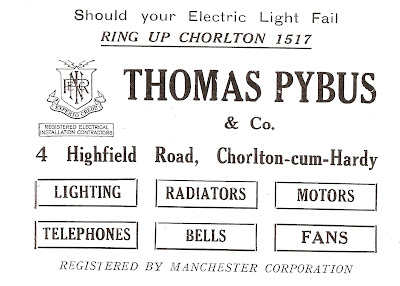 Before the invention of the first electric iron in 1882, irons were either heated over an open fire or the range. This involved the use of several irons, and as one cooled down another would be taken from the heat source. There were also irons heated by various liquids, including paraffin, but what Mary Ann used is now lost. 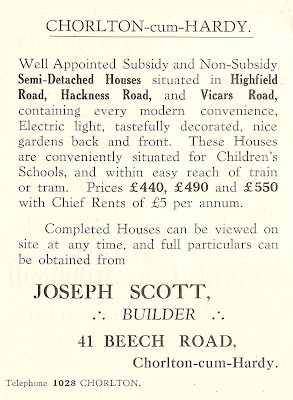 I am sure that they had electricity from very early on if not from when the house was built. In the late 1920s Joe was advertising that his new houses on Hackness and Highfield and Vicars had “every modern convenience” including. “electric lights.”

So I reckon they must also have been quick to get both a telephone and televisions. As for the telephone this was in place by 1924 and the TV thirty years later.

*How Manchester is managed, Manchester Corporation, 1935
Posted by Andrew Simpson at 07:33