The hunt for a photograph, .......... inside the Savoy cinema on Manchester Road

The old Savoy cinema on Manchester Road was my best hope. It had been opened sometime around the First World War and is still there today. True the impressive frontage has gone hidden behind a slab of brick and so too has the ground floor, but I thought there might be something of the upstairs left.

It would be the only intact interior of one of our picture houses. There had been four and now there are no more. The Pavilion down on Wilbraham Road had gone only thirty years or so years after it was opened, the Rivioli was pulled down for a fast food outlet and the Palais de Luxe Cinema on Barlow Moor Road is a supermarket. 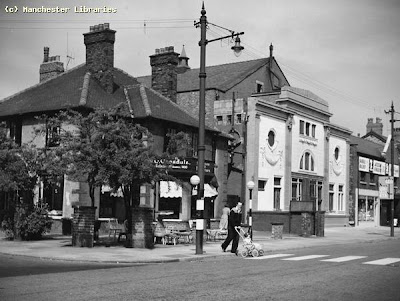 Briefly I had high expectations that there might be something left at the Palais or Palace as it became known. The downstairs has undergone plenty of refurbishments in its time since it opened as a Tesco’s then Hanbury’s and now the Co-op but I reasoned there should be no reason to mess with the upstairs.

After all for most of its life as a supermarket it had been a pretty basic affair. The Tesco outlet had been very much dominated by the old retail maxim of “pile it high and sell it cheap.” Hard as it is now to think that the sleek Tesco stores of the 21st century could have been so. The one in Ashton may even have left the tinned stuff on pallets on the shop floor, but this was a long time ago and my memory can be faulty these days.

But then as a Hanbury store it remained pretty basic. Long after the big retail players had gone in for loyalty cards Hanbury’s customers at Christmas had a card which was stamped by the cashier.

So even given the brand new refurbishment rolled out this week by the Co-op there might have been something left on what would have been the circle and projection room. But sadly it is just a big empty space long since converted in to storage area.

So back to the Savoy and the Co-op Undertakers. The staff there said that there were remnants of what it had once been but there were health and safety issues and I was best writing in and making a formal request. Sadly despite my offer to wear a hard had only stand at the entrance and sign away any rights I had to a claim on the Co-op if anything happened I was still refused permission.

Which is all a bit sad really, particularly as memories of the inside of the Savoy are fading from living memory. I will try again.

But I cannot close without reflecting on the impact of Hanbury’s. I typed in the name on google just to see if there were any pictures of the old store. Instead I found a wealth of comments which makes me think I should write about that other institution on Barlow Moor Road that was Kingspot or “Kingy”, where the world of cheap often bizarre but fun products from plastic novelty toys to paintings of the San Franciso Bridge were all available for a small price.

Picture; one of the last times the old Palais de Luxe Cinema was photographed, taken by A H Downes in the May of 1959, m17516, Courtesy of Manchester Libraries, Information and Archives, Manchester City Council