A new painting and a discovery

I have often wondered what the proud owners of numbers 2- 18 Wilbraham Road would have made of what happened to their homes sometime around 1906.

These nine impressive houses stretched between Albany Road down to Keppel Road were some of the finest new terraced properties built during our housing boom in the last quarter of the century. They were spread over three floors had cellars and quite decent front gardens which were hidden from the road by tall hedges and trees.

Today of course they are fronted by a row of shops ranging from the chemist’s, a fast food out let, a cafe and the inevitable charity shop. Here also until recently was the men’s clothes shop owned by the Burt family which had been established in 1895 and must have been one of the first businesses to locate into the newly added shops.

I doubt many people know that the shops have not always been there. Which is why Peter’s new painting is something of a revelation. It captures perfectly a moment in time on a not so busy Chorlton shopping day. But it also allows you to see the mismatch between the shops and the buildings. Look closely and it’s clear that something very odd has happened. The shops look like an afterthought tagged on and partly obscure the first floor of the dwellings behind.

The houses date from sometime around the early 1880s and were home to the middling sort of people who were fast settling in Chorlton. So in 1891 there were two yarn agents, a of Music,Professor and a mix of clerks. Most of the families employed at least one servant and some took in lodgers.

The houses were in a prime spot. The railway was just yards away and allowed the business types to get into the city in minutes. And maybe this was the problem. The site was just too busy. That short walk to the station involved passing the coal agent’s offices and behind these were the coal yards and the railway tracks and sidings. Noisy, smelly and unsightly.

Or perhaps someone with an eye to business could see that this was a prime location. Everyone needs shops and there were plenty of people in the surrounding roads who needed catering for. So sometime around 1906, the gardens went and the shop fronts arrived. It was not a perfect arrangement and the builders had to put in stairs at the back of the shops to allow access to what had once been the halls and front rooms of the old houses. It also involved taking out the impressive bay windows from the ground and first floors. 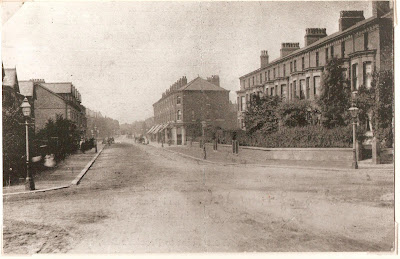 Look again at Peter’s painting and compare it with the old black and white image from about 1885. Nothing I think could better show the transformation from solid Victorian domestic life to the edgy Edwardian world of commerce.

Here were the typical collection of businesses. In 1911 these included not only a chemist and Burt’s, but also a confectioners, grocers, hairdresser, boot maker and milliner. And some of these clung on throughout the century. Stevenson’s the hairdressers were still there in the 1980s and Burt’s only closed in 2010.

Peter as you know paints the pictures and I add a story. His growing body of work can be seen at plenty of places in Chorlton including all the pubs and some of the bars. His work is also available to see at https://www.facebook.com/paintingsfrompictures