Trams, a cinema and much more.

There is enough in this picture for most of us to be able to place it easily. Even if it weren’t for the giveaway title at the bottom of the left hand corner most of us would recognise it as the bus terminus on Barlow Moor Road. 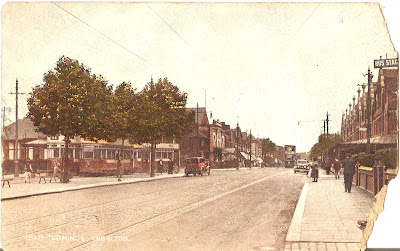 On the other hand we know it is well in the past. The most obvious clues are of course the cars and the trams. The last tram was withdrawn from service in 1949 and from the look of the cars I guess this must be a full decade before that event. We may even be able to take it back even further for the hat and coat of the woman sitting on the bench must date it to the late 1920s or early ‘30s.

Just beyond the terminus is the Palais de Luxe Cinema with its huge and distinctive circular windows looking like giant eyes and the equally striking white and green glazed tiles. Until I came across this picture I had no idea that it also had a glass and iron canopy, which was mirrored by a similar grand one opposite which fronted the shops that ran from St Ann’s Road down to Sandy Lane.

Now this shouldn’t have surprised me. It was opened in 1915 when such things were part of the design of both cinemas and theatres. Just down the road the Savoy had an even more impressive canopy.

So that pretty much seems to be it, but not quite. To the left where St Ann’s Road joins Barlow Moor you can still the old stone setts which have yet to covered with tarmac and finally there are the tram lines and cables all of which marks this out as from long ago.

But for many of the people captured on the photograph what we see was still very new. Had we stood on the same spot as the photographer just twenty years earlier almost everything I have described would have been missing.

The tram terminus, the cinema and all the buildings on to High Lane were built in the decade after 1910. Before that time this stretch back to Beech Road was the garden of the Holt family who also owned the land opposite.

They had been here since the 1830s and three generations of Holt’s had lived behind the tall wall that ran from Beech Road along Barlow Moor Road, down High Lane and then back to Beech Road close to the modern Cross Road. The entrance to their estate was at the top of Beech Road and their coachman lived in a small property beside it.

So sometimes a picture tells you even more than you first thought.

Picture; Barlow Moor Road from the Lloyd collection, date unclear
Trams, a cinema and much more.
Posted by Andrew Simpson at 04:44