One hundred years of one house in Chorlton, ......Part 12 the all electric home

The continuing story of the house Joe and Mary Ann Scott lived in for over fifty years and the families that have lived here since. 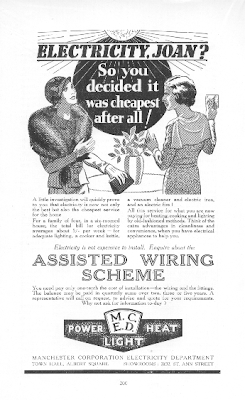 We only took the old junction box off the cellar wall a few years ago. I cherish plans to clean it up and put it on display. It is a simple heavy metal box with a glass inspection window and has the letters M.C. E.W at the bottom just above the symbol of the sun.

It is a functional but I think beautiful piece of house furniture and it currently sits beside the old fuse box which still has three of the six ceramic fuses.

In 1935 Manchester Corporation boasted of its all electric houses, reporting that
The Housing Department recently completed 50 houses with all-electric equipment on the Brownlev Green Estate. These houses are provided with a coal fire in the living room, by means of which domestic hot water supply is also provided and a cooking oven heated. An electric griller for breakfast and lighter cooking and a kettle are provided, and inset electric fires are fitted in the two main bedrooms. An electric wash-boiler completes the equipment. Socket outlets for an iron or radio equipment are also provided, and the installations are supplied through prepayment meters. The results of the operation appear to be quite satisfactory. Similar installations are being provided in flats at Smedlev Point and Kirkmanshuhme lane and will undoubtedly indicate the suitability both as regards cost and convenience of electrical equipment for working-class dwellings.* 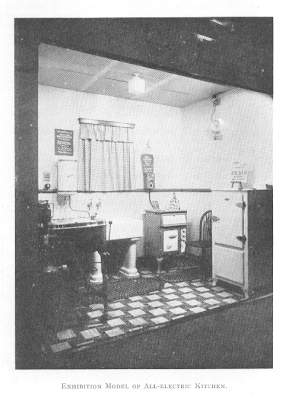 Just three years later in Your City written to celebrate the centenary of Manchester as a city the Corporation had proudly reported that the new Barton B power station “produces the power which you command by depressing a switch. Have you ever thought how much children benefit from electricity both physically and mentally” and accompanied this with illustrations of children reading by electric light, being warmed in their playpen by electric heating, helping their mother cook on an electric cooker as well as sitting in a steaming bath heated by the electric immersion heater and sitting under an electric ray lamp. **

Now Joe and Mary Ann never fully embraced electricity for their home but were forward enough not to have gone with the old gas lighting technology. As I wrote yesterday http://chorltonhistory.blogspot.com/2012/02/one-hundred-years-of-one-house-in.html the garden estate of Chorltonville built in 1911 had gas lighting fitted as standard. 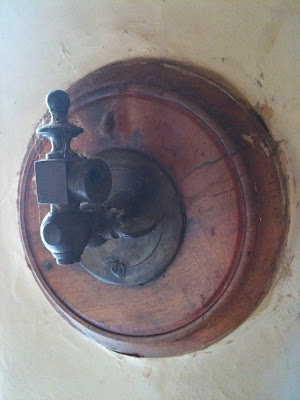 There is something quite quaint about using gas as a source of lighting. When it was introduced it was described as “illuminated air” and must have been a truly liberating innovation. Here was a source of light far more powerful than the old oil lamps or candles. And they had a long life. Manchester Corporation installed new improved gas lights in St Peter’s Square as late as 1935.

But on this the Scott’s were with electricity although I doubt they made use of the Corporation’s service of
"Assisted-Wiring and Prepayment-Wiring schemes, whereby consumers may have their houses wired at a small or without any initial payment. Hiring schemes for motors, cookers, wash-boilers, and water-heaters. Hire-purchase schemes for nearly all appliances (except lighting fittings) costing £2 and over."
He was after all a builder.

Sadly nothing else is left of the old electrical fittings, although there is one plastic power point still sitting forlornly on the skirting board in the front room. Where the others were is a mystery. There may even have not been any upstairs if the experiences of friends of mine are anything to go by. They bought a tall imposing terraced house facing the railway in Ashton Under Lyne back in the 1970s. All had looked fine when they went to see the house with a mind to buying it but when they moved in all the power points upstairs were missing, there were just neat screw holes on the skirting boards. There never had been any power to the bedrooms other than the lights.

Not that I can see Joe or Mary Ann having tolerated such an idea. By 1924 they had installed a telephone and must have been one of the first in Chorlton in the 1950s to have a TV. But for now the story of the all electric house here on Beech Road has yet to be discovered.

Pictures; advert from Manchester Electric Supply and picture of an all electric kitchen 1935, Manchester Corporation, and gas fitting in the collection of Lawrence Beedle