The continuing story of Richard Buxton, working class botanist who record the plants of Chorlton

When the Buxton family arrived in the Ancoats it was just beginning to change from open fields with its own Hall to urban sprawl. The transformation was completed in just a few decades, and the casual visitor who might have once walked through fields in 1770 would have been met with a maze of narrow streets, dark courts, grim workshops and noisy cotton mills twenty years later. 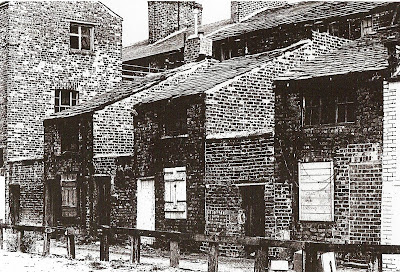 The impetus for this development came with the building of the Rochdale Canal in 1804. It was built on the east side of the area and even before it was finished industrialists had begun erecting cotton mills along its route. In 1815 Ancoats had more cotton mills and the largest number of households than any of the other rating districts in the city. The population, swelled by large numbers of immigrants from Ireland as well as the surrounding area, rose from 11,039 in 1801 to 53,737 by 1861.
It was a crowded and teeming place, which visitors to Manchester either admired or like the Prussian, Johann Georg May thought was a “scene of melancholy.”

A view endorsed by another foreign visitor, who “saw the forest of chimneys pouring forth volumes of steam and smoke, forming an inky canopy which seemed to embrace and involve the whole place ......It is essentially a place of business, where pleasure is unknown as a pursuit, and scarcely rank as secondary considerations. Every person who passes you in the street has the look of thought and the step of haste”

Buxton who lived amongst the grime, smoke and melancholy was far more generous when he wrote “The operative who lives in a large manufacturing town, sees plenty of the handyworks of his fellow-men in the giant steam-engine, the ingenious mule, which rivals the gossamer in spinning threads, the never-tiring power loom, and the countless other contrivances of mechanical skill which have resulted from the fertile brain of man.”

But this paean to industrial Manchester only serves to act as a contrast to the wonders of flowering plants and open fields. The worker might see “the triumphs of science and art but little of the works of nature. This renders him an intelligent, but to a certain extent, an artificial man.”

It is no wonder I suppose that he should hold to the “many delightful walks, by pleasant streams through green woods.” All the more so when faced not only with the dirty industrial waterways, and satanic mills but awful hovels which were home to so many in Ancoats.

Speculators had followed the industrialist in laying out streets and building houses in the area and with no regulations much of the housing was of the worst type. It hadn’t always been so. Working class dwellings erected in the last two decades of the eighteenth century tended to be substantial and used good quality materials. Some of these like those on Lever Street were built in the 1790s and were constructed on three floors with cellars and were at first occupied by artisan families. The uppermost floor would have been used as workshops and some of these surviving on Liverpool Road still have the longer and wider windows designed to admit the maximum amount of daylight.

But under the impact of the growing population, builders responded with cheap poorly constructed buildings which used the cheapest materials. In an effort to maximise the number of houses that could be erected on a given plot speculators began building one up one down houses which were back to back. The outer wall would be one brick thick and internal walls just half a brick. Many would have been built in courts and access from the main road would have been by narrow alleys.

There are some one up one down houses on Bradley Street. The Bradley Street ‘three’ are the last remaining one up one down houses in Manchester. They were redeveloped in the late 90s and nothing is left of the original interior. Similar houses which have been excavated at Greengate in Salford opposite St Mary’s in Manchester reveal the small shoddy nature of this type of house. They had room sizes of less than 3.5 m square with foundations of one brick depth. Each ground floor room had a fireplace but there was no sign of floor covering nor a staircase and it is likely that access to the upper floor was by a wooden ladder.

Picture; One up one down houses, Bradley Street Manchester 1983, Courtsey of Manchester Early Dwellings Group

Email ThisBlogThis!Share to TwitterShare to FacebookShare to Pinterest
Labels: Ancoats in the 19th century, Richard Buxton