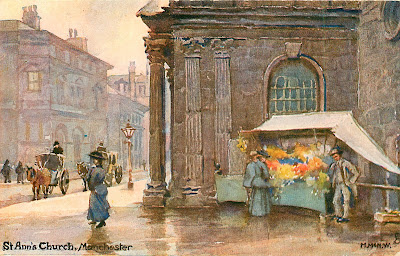 Now I fell on this picture postcard of the flower seller by St Ann’s Square fully intending to write about a century of selling flowers at this spot.

The post card is from a series dated to 1902, so here we seemed to have over a hundred years of continuity.

But by one of those twists of historical research my facebook friend JBS came up with one for 1898 and in the way of these things I bet someone was selling flowers from this pitch even earlier in that century.

That said it is just possible that the painting is earlier than 1902 and might have been made in the last decade of the 19th century, but I would be guessing so I shall just leave you with the observation that it is a nice picture.