At the markets ..... Letter from Varese 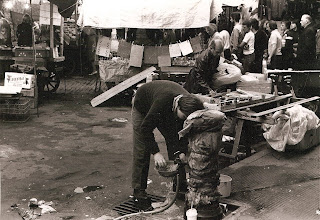 I like markets and for sheer vitality and the variety of choice I don’t think you could beat the old Grey Mare Lane or the one in Ashton, although I have friends who regularly head up to Bury on the tram. Then there are the farmers’ markets which in some places have gone weekly in an effort to lift the experience from a monthly treat to a daily and normal part of shopping.

So when ever we are in Varese I look forward to a trip to the market beside the railway station. It is in the way of things that while I find the whole thing a lot of fun Tina laments that it is a pale shadow of what it used to be. Once the stalls would include those that were selling the type of clothes that would later go into the fine shops and here in Varese they were trying out limited trial runs. But today it is merely the cheaper stuff which can be seen in any market across the world, Cheaply produced sometimes badly finished off with in the case of T shirts the iconic image of the Stars and Stripes or our own Union flag.

But amongst all these there are still those that catch the eye like the fabric shop selling everything from lengths of brightly coloured cloth to buttons and balls of wool. Or the electric and clock stall which specialises in all those little gadgets you had forgotten, including the ash tray on its long stand with a spring mechanism which opens and closes the lid with a bewildering speed and fearsome noise. And of course the cheap and I suspect lethal version of the lava lamp, manufactured in some backstreet work shop in Palermo with scant regard for the laws of electrical safety. 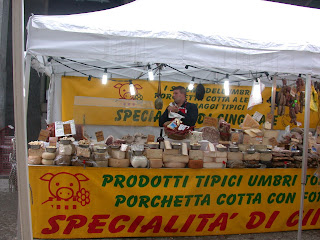 But today down by the Via Giacoma Leopaldi in the shadow of the town’s principal church are a row stalls selling bread, cheese, meat and those sticky preserved fruits and nuts which were once the main sweet treat. And like our own international markets which are a feature in Manchester at Christmas time these are expensive.

You cannot fault what is on offer. Huge loaves of bread, enticing cheeses and great mounds of fruit. I was drawn to a stall selling the biggest round loaves I had ever come across and likewise wonderful looking cheeses.
But like at home it is all a bit deceptive. They all enticing and convince you that they are the real thing. So we stand in front of the man from Sicily with his regional specialities on show, gawp at the fine presentation and then buy a container of giant green olives, but as we move away Tina wonders if we have been oversold an experience rather than a good deal on olives. 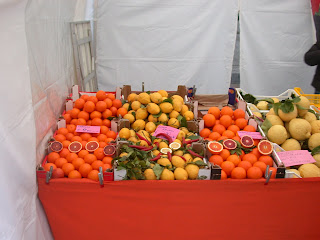 And I have to say that earlier in the day we had been in the local supermarket and could have bought everything that we saw on the food stalls. And before anyone slips into an attack on the uniformity of food in supermarkets, I have to say here in Italy the idea of a regular sized even looking vegetable is unknown. 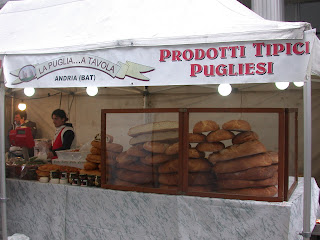 Here they come in different sizes and shapes look as if they have come out of the ground and not a Polly tunnel and as if to emphasise the point will often still have the earth on them.
In the same way here can be found great lumps of cheese, like the block of parmesan that I bought for €13, which I know tastes so much better than the small evenly vacuum wrapped smaller ones on offer at home.

Still I know I will be back on Tuesday at the market beside the station and if the man from Sicily is still by the town hall I will gaze with fascination at what he has to sell.