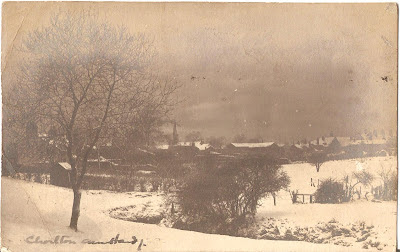 We had a power cut yesterday. It didn’t last long, just the time it took for me to go out looking for candles in parts of Chorlton where the lights still blazed and cash tills worked.

The family thought that I was being over dramatic, and reminded me how in the weeks before the millennium bug was supposed to have hit I bought in candles, bottles of water and tinned stuff as well as doubling the coal order.

And despite the regular jokes in the family about my stockpiling of a decade and a bit ago I reasoned then and still do that I had a duty of care to the lads who were still quite young and if the gas stopped flowing and the water was interrupted then at least we would have the essentials for the few days it took to sort it out.

Now candles are one of those things we do usually have but we carried on using them in the weeks after Christmas and as a result I chose to walk the streets in search of some. All of which you can guess got me thinking.

I am perhaps the last generation who actually thinks that candles are an important household requirement not just because they can be romantic but because my father always maintained a stock. He had been born in1908 and never shook off that more practical approach to technology. So he bought in the candles, just in case, and lit those small hurricane lamps which he left in the loft and cellar in extreme cold weather to keep the temperature above freezing and so prevent frozen water pipes.

It was just what you did. Now this is not going to turn into a survivalist rant or a cosy story of grandma under the stairs during the blitz, nor for that matter a description of a midnight walk along the Row* in the early 19th century guided only by the stars. Although I have to say that when the photograph of the village was taken electricity for many in the township was still not a reality.

Instead I just thought I would reflect on how odd it was when the power went. It was as some said on facebook suddenly very quiet, No TV, or radio and not one downloaded streamed past programme on a lap top anywhere in the house. Moreover with the landline phone charging or not in this case the only form of communication was the mobile and knocking on next door to see if they still had electricity. There was for a few minutes that odd sense of being totally cut off.

Now not so long ago we would have had a radio with batteries but who bothers with them now? “Find an electricity bill and phone the gas board” was the helpful suggestion of my partner, which would have been fine had we not gone on to a paperless bill, which to access meant using the internet. In the end I used the old fashioned and expensive way of going through directory enquiries and phoning our provider, only to be told it was matter for Norweb.

I am old enough to remember the three day week when power was rationed and each part of the city took it in turn to sit in the dark for a few hours. But then I was a student and it was all a bit of a lark and you planned your pub visit by where there would be electricity.

I can’t say that appealed last night. So there we were faced with the prospect of all sitting in a darkened room huddled around the open fire and forced to spend an evening together, which is not an event that usually happens in our house or I suspect in most. Monopoly, Cluedo or perhaps a selection of ghost stories? It was an odd prospect.

Of course this is not to trivialise those real crisis moments we see on the telly where families due to a natural disaster or war are holed up in their home for days with little in the way of supplies. And our powerless moment lasted but a short time.

Soon after I returned from the shops and as I was talking to our provider the power returned and with it, heat to the oven, sound on the wireless, and pictures to the telly as well as international links via the laptops. Armageddon and the prospect of an evening with the family were averted.

Still, I must go and replace the candle stock.

Picture; from the Lloyd collection and you can read about the photograph in the post at http://chorltonhistory.blogspot.co.uk/2012/02/chorlton-in-snow-postcard-from.html

*The Row or Chorlton Row to give its full name was what Beech Road was called.
Posted by Andrew Simpson at 08:47