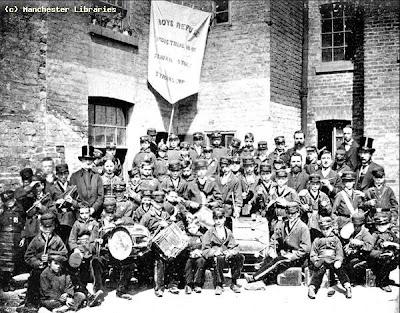 I doubt that many people would give the picture much of a second glance. Here is a collection of boys in uniform staring back at the camera with a handful of adults wearing those silly tall shiny hats.

And I suppose most of us would think we had stumbled on a band of apprentice musicians sometime in the 1870s. But the clue is the banner. For these are no ordinary group of children, nor is the building just a backyard.

Here just three years after it had been established was the Central Refuge and Workshops of the Manchester and Salford Boys and Girls Refuges and Homes providing shelter for boys and girls living on the streets. The first home had been at 16 Quay Street, Deansgate, and contained twelve hammocks giving homeless boys a bed for the night and breakfast in the morning before having to fend for themselves during the day. It had opened on January 4th 1870 and closed a year later when the central headquarters was established in Strangeways in the autumn of 1871 on Francis Street where boys received shelter and education and were assigned a form of work most suitable to their abilities.* 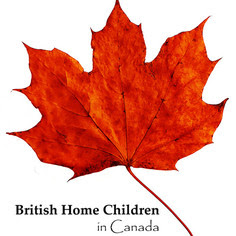 And in the following year the first group were sent to the Marchmont Home, Belleville in Ontario, Canada which acted as a receiving home for children pending arrangements with the local farmers to take them into their families and provide work.
It is one of those odd quirks of research that in wanting to find out more about my great uncle who was sent to Canada in 1914 as a British Home Child from Derby I should stumble across a major link with my adopted city.

So now I am locked into a new area of research, for many of the documents from the period relating to the Manchester and Salford Boys and Girls Refuges and Homes are still here in the care of the Archives and Local History Library in the city and with the help and permission of Liz Sykes, Records, Archives & Information Officer of the Together Trust I hope to trawl the history of the organisation and in the process learn more about a scheme which took 100,000 children to Canada.

*taken from the briefing notes of the Together Trust http://www.togethertrust.org.uk/uploads/assets/files/How%20we%20help/Manchester-Salford-Boys-Girls-Homes-1870-1920.pdf