On campaigning at election time in April 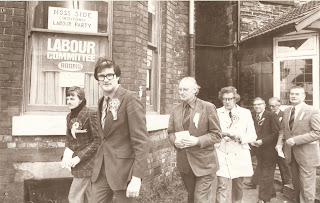 It went almost as quickly as it came but for a short twenty minutes last week’s hail storm was pretty dramatic and left the Rec and the surrounding gardens covered in ice.

And it got me thinking again about how unpredictable April can be and its impact on those who work outside.  I have already reflected on the joys of working on the land which would have been the lot of many of residents in the early to mid 19th century. http://chorltonhistory.blogspot.co.uk/2012/04/turning-out-to-tend-land-in-april-of.html

And as I sit here gazing out on  the fruit trees and vine on another cold and wet morning I am reminded of the years I walked the streets delivering leaflets and canvassing the voting intentions of people. I started early at the age of 16 in 1966 and carried on through the 1970s into the mid 90s.

It can be a daunting task at this time of year, when the cold, rain and sometimes sleet turn the leaflets into sodden sheets and your fingers find it hard to record anything on the canvas card.  My own worst moment came after a particularly vicious fall of driving sleet. It was just beginning to darken and then was no one on the quiet road and as I pushed the card through the door, it slowly came back at me, and for just one moment I had a feeling that there was someone else on the other side in what I had taken to be an empty house directing it back.  Of course it was nothing more than the letterbox which had some sort of draught excluder which trapped the card and sent it effortlessly and silently back.  But in the darkening evening with no one else around it provided me with one of those “moments.”

Now I worked at a time when the main parties had adopted the Mikardo or Reading Pad system pioneered by Ian Mikardo, which consisted of lists of electors stuck by hand onto canvassing cards which allowed you to record their voting intentions.  The “promises” were then written up by had on to self carbonised sheets with as many as four pages and on the day of the election as your people voted their names were crossed off and in the evening you visited just those who had yet to vote. The system relied on part workers sitting patiently outside the voting stations asking for either the poll card or voter number which was then ferried back to the headquarters where the names could be eliminated. 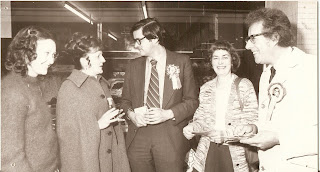 It was a wonderfully simple and yet efficient way of identifying your support and trying to get them out on the day.  Of course it relied on the accuracy of the canvass but it worked and it had the extra bonus of allowing supporters who couldn’t walk the streets to make a contribution by either cutting and sticking the list of electors on to the cards or writing up the reading pads. And I can remember the big progress sheets which listed each road and the number of promised voters.

Nothing quite matched the excitement of the committee rooms on the day as the returns from the polling stations arrived and the on gong tally of voters was analysed and decisions of when to go knocking up those who had yet to vote were debated.  I remember creating small teams of two or three workers with a driver and car who during the evenings took charge of a collection of roads, and got stuck in visiting the houses ferrying voters to the stations and enjoying a gentle bit of competition with other teams to see who was getting the most out.

Now I had also worked the older system where groups of workers descended on a street and in a flurry knocked on doors announcing their presence, expressing their wish that the resident would vote for the Party and moving on.  In small terraced streets it had quite an impact but lasted just as long as the canvassers were on the door step.

And I was there just as the computer and the telephone began to change things.  But it still falls on the faithful to pound the streets in the cold and rain of an April evening.  That bit hasn’t changed.

Pictures; from the campaign to elect George Morton, 1978, the Lloyd collection
Posted by Andrew Simpson at 04:00