Our workhouse stood on the island formed by Leaf Street, Streford New Road, Nelson Street and Devonshire Street in Hulme. It was replaced by the Withington Workhouse built in 1855. 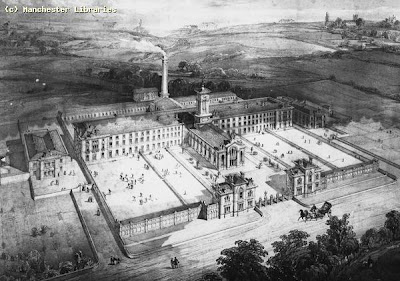 This building survived into the 20th century as a workhouse before being a hospital. It was here that two of my sons were born, the place where a third stayed for 5 weeks after breaking his leg and a frequent destination for the minor accidents of young lads.
Picture; The Withington Workhouse 1856 m53434 Courtesy of Manchester Libraries, Information and Archives, Manchester City Council

Email ThisBlogThis!Share to TwitterShare to FacebookShare to Pinterest
Labels: The Workhouse