Easter Sunday in Italy, another letter from Varese

I reckon we do Christmas pretty well. The tree has to be taller than the room and usually needs some cut off the bottom and now at the insistence of one of the lads we have a second smaller one in the dining room which just sets the room off for the Christmas meal.

Last year there were eleven of us and during the rest of the week the number around the table fluctuated but never fell below nine. And despite all the consumer hype we did reflect on what the festival was all about. 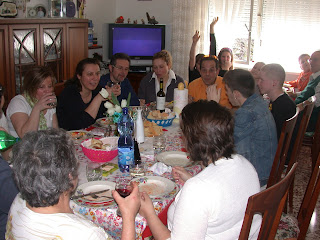 And Easter in Italy is much the same. Rosa will have been cooking in the days up to Easter Sunday when we had seventeen sitting down for the traditional meal.

Rosa is from Naples and much of what is served up comes from the south. On the Thursday before Good Friday she baked three savoury cakes, two of which had salami in and the third eggs still in the shells. 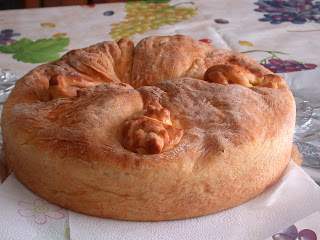 Not to be out done by this on the Saturday she made seven special tarts. These are made with ricotta cheese, eggs, sugar and candied peel and finished with a lattice of pastry.

At the same time there was one of the lads favourites which consist of spaghetti fried with egg and cheese and left to cool when it is eaten in slices.

Good Friday had indeed been fish day, starting with pasta and baby clams followed by baked white fish and salad. 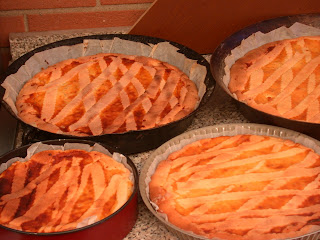 But it is Easter Sunday which is the real day.

There were vast amounts of cooked meat ranging from lamb, pork and chicken, followed by salad, roast peppers in olive oil and roasted potatoes and as a concession to me the veggie two giant pies one with leaks and the other with artichokes.

Later there was the ricotta tart and then the coffee with limoncello.

I have to say this was the point when some of us went off and walked Sacro Monte. It is no mean walk and consists of a steep trip up past the 14 chapels built between 1604 and 1623 and as you expect the views back down the mountain towards Varese are stunning. 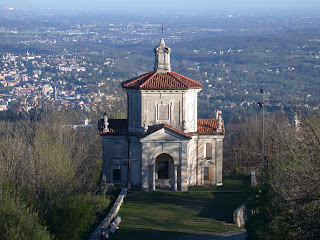 And the following day we followed up the Easter meal with another at family across the border in Switzerland.

Again there were vast amounts of roasted meats and salads with plenty of wine and followed by Nocino which is another of my favourite drinks to accompany the coffee.

Rosa had brought one of the ricotta cakes and this is a tradition.

Whenever you visit friends or relatives the custom is take a collection of pastries. I rather think it is a civilized way of doing things.

It was another of those events where the food just kept coming and after a decent pause it all started again.
So there you have it Easter in Varese with the family.