What they tried to sell us in 1850 part three 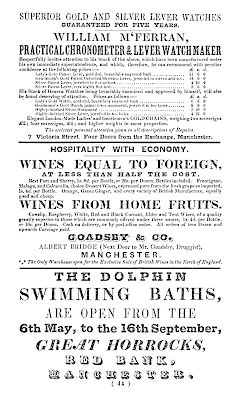 I just wonder if some of the raspberries used by Gadsby & CO "At Albert Bridge" were sourced  from here in Chorlton.

Many of our farmers and market gardeners grew fruit for sale in the Manchester Markets, and when the contents of Red Gates farm was auctioned in the November of 1855 the advert stressed the

"The Whole of the Very Excellent Produce of Fruit Trees comprising of 45 tons of very good well got hay, about 120 thraves  Of wheat, about 170 thraves of oats, about 100 loads of potatoes  about 25 tons of swede turnips, about 20 tons of mangol wurzels, a large quantity of raspberry and currant trees and a quantity of rhubarb plants.  Sale to commence at one o’clock."  Further particulars may be had by applying to the Auctioneer, Patricoft; or 18 Cooper street, Manchester”

So the advert from Slater’s Directory of Manchester & Salford intrigues me, but I guess we will never actually know.  The auction was occasioned by the departure of the farmer, William Whitelegg who had been farming at Red Gates from at least 1841 and probably much earlier.

The story of the farm crops up quite a lot in the blog and lasted into the 20th century before becoming the site of the library in 1914.

I have also wondered the fate of William M’Ferran the “Practical Chronometer & Lever Watchmaker at 7 Victoria Street Four Doors from the Exchange Manchester.”  Now I could trawl the trade directories and hunt the census records but I think I will let William M’Ferran rest.  Suffice to say his price list is an wonderful introduction into world of Practical Chronometers with his “Lady’s Gold Pattern Lever, gold dial, beautifully engraved back” at £11 and the “Elegant London Made Ladies and Gentlemen’s GOLD CHAINS” weighing four sovereigns and selling at £4."  In contrast to a police constable’s weekly wage of £1 a week or a teacher’s annual salary of £55.

Now I have no doubt that Mr William Whitelegg had his own chronometer which might just have been paid for in part by his raspberry and currant trees.

Picture; from Slater’s Directory of Manchester and Salford 1850