Going and gone, buildings I have known in the city 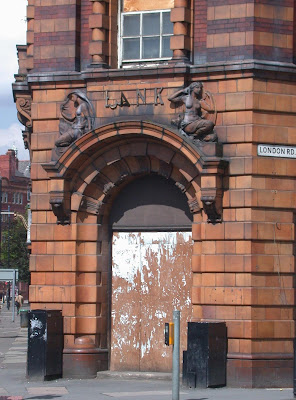 It is hard to see how the old Fire and Police Station complex on London Road will survive.

True it is a listed building but I fear without lots of tender care and attention it will soon be too late to save it.  Brought down by neglect and just possibly the attraction of a prime location in the heart of the city.

Now I have written about the place in the past* and watched it slowly empty of purpose and people.  Even the bank on the corner of London Road finally shut up shop and moved on.

And despite calls for something to be done it sits there waiting “to see better days and do better things.”  But I have a sense that time and the fabric of the building will seal its fate.  Then again I am an optimist and always travel in the sure knowledge that the bottle is always half full, there is something pleasant around the corner and old places can be saved. 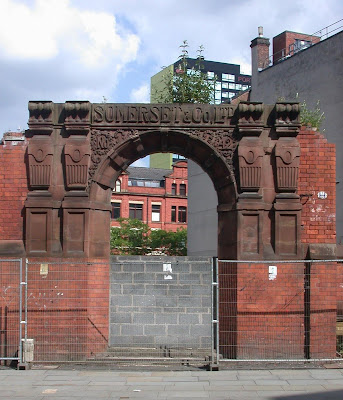 Not so the building just a few minute’s walk away on Whitworth Street.  I passed it countless times and think it once held the offices of the Manchester Conservative Party.  I certainly remember it always struck me as a forlorn and forbidding place which wouldn’t have lifted my heart had I worked inside.  But then Whitworth Street always reminds me of one of those canyons in a western film, all narrow valley and tall steep sides.  I know well the books which describe how impressive these buildings are but they just overpower me and even on a sunny day it’s a dismal place.

And so having been empty for what seemed decades this one came down, served as a car park and at present is a stalled building project.  But it is an exception, even in this period of retrenchment and stagnation chunks of 19th and 20th century Manchester are being torn down and replaced which is a nice lead into St Peter’s Square, Central Ref, a tram station and a 1950s office block which is no more.  But that is for another time.

Pictures from the collection of Andrew Simpson

*http://chorltonhistory.blogspot.co.uk/2012/06/history-is-wasted-on-young.html
Posted by Andrew Simpson at 03:30