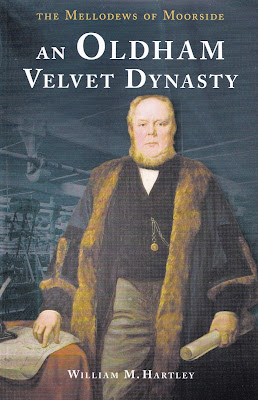 The Mellodews were textile magnates who ran a successful business from mills in Moorside near Oldham for more than a century.

And I don’t suppose I would ever have heard of them if I hadn’t been asked to write a review of the book about them.*

This is a new venture for me and one that I am still getting to grips with.  First there is the task of reading it, and then the more difficult exercise of writing about it in the space of just 300 words.

Now the received knowledge is that you read it all the way through first and then start writing the comments, in just the same way that I was told in making notes from a book, you read it all, form an overall judgement and then make the notes, which usually means you write less because you have a sense of what is coming.

But this is the blog and part two of Thomas Mellodew, an Oldham cotton business which I first posted on March 21st.**

And the task I set myself is to write a series of regular updates on writing a review and in the process share a little of what the book is about, but dear reader not enough to be a substitute for parting with £14 and reading the story yourself.

Thomas Mellodew set up his 30 looms on Sholver Moorside above Oldham in 1850 specialising in cotton velvet and prospered.

In time as the two maps show the business grew from just the one mill to two large cotton factories with interests in collieries, a brick works three pubs, workers cottages, and farmland.

The first half of the book is a fascinating insight into how a family from humble beginnings made good and along the way offers a good description of how cotton was worked.

And for me what marks the book out as different is that it is a departure from the story of those who worked the looms and fed the boilers to those who managed the capital and did the deals.  So there is little about factory conditions, or the quality of the life of the men, women and children who laboured in the mills.

But then this is an account “primarily about a cotton firm and its owning family” and that does make it an area I know little about.

So here are descriptions of how a textile business got started, the means by which it was financed and the way the owners developed the enterprise and planned for the future.

So it’s strength is that we are dealing not in generalities but of one firm in an identifiable part of Lancashire.

This breaks new ground for me and does a little to redress my usual bottom up approach to history.

What is more I have now reached the point in the book dealing with the 20th century which is when textile manufacture seems to be running all downhill. The optimism and sheer dynamism of the early firm has slowed down and faces the new competition from the USA and Japan and the slow demise of the whole industry to the point in the 1980s when the company put the two mills up for sale, and had to  withdraw them because they failed to get a buyer.

But that is for part three.

Pictures, front cover of An Oldham Velvet Dynasty, and Moorside from the OS map of Lancashire, 1841-53, and the oS for South Lancashire, 188-1893, courtesy of Digital Archives, http://www.digitalarchives.co.uk/

Email ThisBlogThis!Share to TwitterShare to FacebookShare to Pinterest
Labels: Oldham in the 19th century, The Industrial Revolution, Thomas Mellodew