One hundred years of one house in Chorlton part 28, of ants, mice and much worse 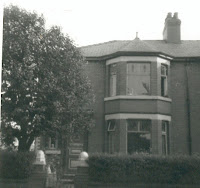 I am fairly confident that we have repulsed the ants.

They appeared one day and stayed with us for a few weeks.  And their visit split the household.

Now I take the line that it’s better to do nothing and eventually the situation will sort itself out, which the rest of the family reckons is about travelling through life more in hope than any a certainty and really just smacks of laziness.

So two days ago I was handed the anti ant powder.  It didn’t promise an instant solution but explained that ants would take it back to the colony and there it would wreak its effect.  What that was is left unclear and for someone who doesn’t even kill slugs I don’t want to know.  But the ring of powdered steel seems to have solved the problem.

In the nearly 40 years I have lived here I can count two mouse invasions a wasp nest and of course those persistent silverfish.

Now I don’t know how Joe and Mary Ann got on but they did have cats which do seem to deter mice and their love of cats is not only testified by the remains which are occasionally dug up in the back garden but also because the house was left to the PDSA in their will.

Back in London my father favoured the mouse trap and the Corporation’s rat poison, while for humbler insect infestations it was Flit which came in powdered form and smelt like it should do the business.  This was used to regularly douse the inside of the dustbins which were the old heavy metal variety, carried through the house from back to front on bin day.

No one on Lausanne Road in 1955 left their bins out on the front.

All of which is nothing compared to the daily invasions lurking in the wattle and daub cottages of our township in the mid 19th century.  The thin walls of wattle with their daub covering were easily penetrated by all sorts of infestation as were th0se charming and picturesque thatched roofs 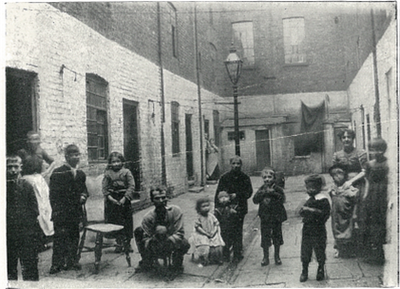 And 4 miles away their brick built counterparts in the heart of the city were equally home to horrible things.

Throughout the 19th and into the 20th century the war against everything from vermin to insects was waged and by and large lost.

As late as the 1960's one friend remembering her time off the Ashton New Road would always turn on the bedroom light at night to frighten anything off before entering the room.

But in these old poorly built terraced houses however clean you tried to be and however much carbolic soap was applied along with furious and frequent sweeping infestations were difficult to control.

Any victory was short lived, because the infestations were everywhere, so to they would reappear from next door or from the house opposite. 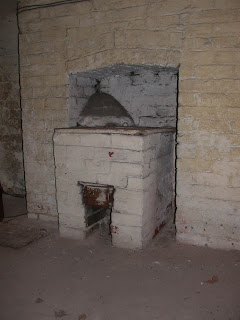 Still it was a battle worth fighting and explains why so many of the properties were given that distinctive coat of white wash.

It was sold as a  powder and you  just added water.

It covered even the most uneven of surfaces taking a few days for the paint to fully harden.  It was very cheap and had antimicrobial properties which kill or inhibits the growth of bacteria and fungi.

I well remember my own father using it in our yard wall and out houses.

And it was there on the walls of our cellar, applied first I guess by Joe, but more I suspect just to brighten up the place which Mary Ann would have used as a washroom.

Their home built in 1920 was a world away from either the old wattle and daub cottages or the brick built terraces of the city which couldn’t but attract dirt and vermin.

And touch wood the ants have stayed away.

Pictures; from the collection of Andrew Simpson and the Together Trust.