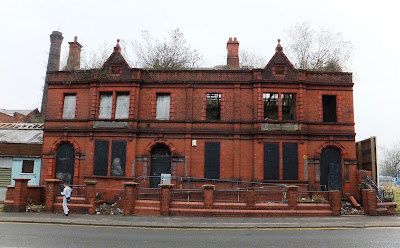 Now for the last couple of days I have been thinking and writing about the Whitworth Baths on Ashton Old Road.

The stories have brought a shedful of memories from those who remember gaining swimming certificates there to others who described in detail the inside.

So I thought I would close with two of Ron Stubley’s pictures taken recently.

Ron has been contributing photographs to the blog for a couple of years and can always be relied on to come up with some fascinating pictures of ghost signs along with buildings long since abandonded and forgotten.

So here are two of the Baths which show both the perilous the building now is in along with the sheer size of the place which I had never really clocked.

They date from 1890, served the community of Openshaw for almost eighty years and now stand forlorn, empty and waiting for another use. 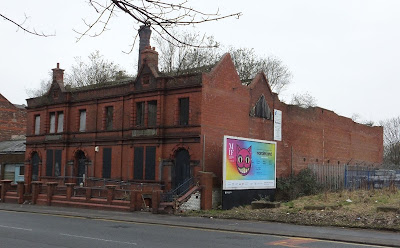 Today public buildings tend to be bland, all pretty much look the same and have those plain plastered walls painted in neutral colours.

Go back a century, and town halls, public baths, and even minor Corporation offices were decorated in tiles, and interesting stone figures and shapes.

Now the realist will point to the fact that the tiles made the walls easy to clean while both the tiles and the stone detail were mass produced and just bought off the shelf. 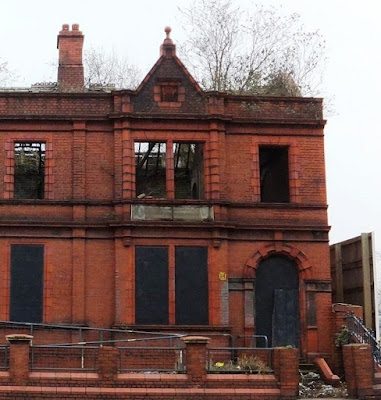 That said they gave a dignity to even the modest of buildings and said something about civic pride and that simple belief that even the most humble and work a day places could look attractive.

It may well be that the Whitworth Baths are doomed but at least we have a fine collection of pictures along with plenty of memories to stand for what was once an important part of the community.

So I shall close with this detail from one of the pictures, which show the fine finish the building was given along with its present state of dereliction.

Ron has recorded both and has captured the sheer size of the place streatching back and that  tall chimney.