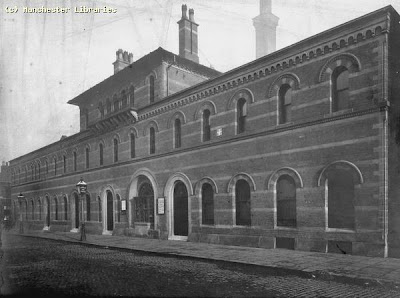 Now one of the things I like about writing history is that you get to meet lots of people all of whom have a story to tell, but in the way that history used to be written, most of these people would have been ignored.

They did not hold great offices of state, did not engage an enemy in heroic combat and didn’t come up with some profound invention.

My history lessons at school were full of Kings and Queens, and generals as well as politicians but never about the army of cooks, maid servants or foot soldiers without whom all these noble people could not have done sterling things.

This came back to me recently when I was rereading a story on the old Chorlton Union Workhouse which had stood on the island formed by Leaf Street, Streford New Road, Nelson Street and Devonshire Street. It was replaced by the Withington Workhouse built in 1855.

And the site was taken over by the Manchester & Salford Baths and Laundries Company opened their third public baths on the site between 1858-60.

The company had been formed in 1855, and built baths in Salford, Mayfield at Ardwick and Victoria Park.  Its assets were bought by Manchester Corporation in 1877.  The company had added a Turkish bath in 1860 which was the first in a public baths in Manchester.  The Leaf Street Baths were demolished in the clearances of the 1970s and today the site is open ground.

All of which is a roundabout way of wondering if any one remembers the baths, and more importantly has stories about them?