Now here is a bit of history that I bet lots of people know but has passed me by and it concerns St Margaret’s playing fields in Whalley Range. 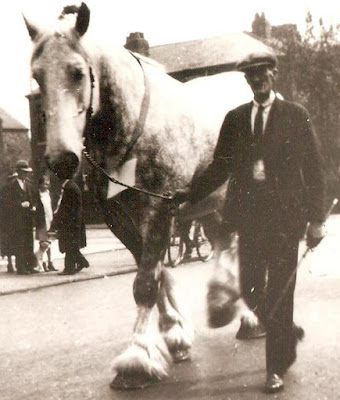 The land is on Brantingham Road and was gifted by the wife of one of the vicars of St Margaret’s and in in 1937 it was the destination of that years Chorlton carnival.

Back in the 1930s there were a number of carnivals across the city but Chorlton’s seemed to be the biggest according to the Manchester Guardian which reported that “the gala held in St Margaret’s playing fields, Chorlton-cum-Hardy, on Saturday [June 19th] may be said to mark the opening of the charity carnival season.“*

Now I recently wrote about the carnival but pretty much ignored the playing fields but after a few people asked where they were I went looking.**

The obvious place was beside St Margaret’s Church in Whalley Range and while I was close I wasn’t in quite the right place. 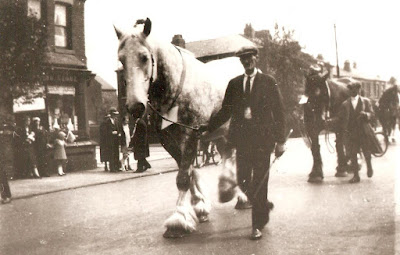 The church had been built in 1849 on land given by Samuel Brooks but the playing fields date from sometime later.

I have yet to establish when but I do know that in 1894 the land was still part of Whalley Farm and as late as 1911 Brantingham Road had yet to be developed fully.

That said I hope to talk to Mr Boulter the vicar at  St Margaret’s and perhaps even before then someone will come forward a bit more of the story.

And within minutes of posting this story,  Pawel Lech Michalczyk who pointed out that  "St Werburgh's Church owned playing fields.

These were opposite Parkgaye Farm, accessible via the short cul-de-sac off St Werburgh's Road.

It was the whole triangle between the railway line and Chorlton Brook, almost up to Mauldeth Road West.

Its now part of the Chorlton High School campus."

Picture; horses being paraded along Oswald Road sometime in the 1930s, courtesy of Mrs Kay, from the Lloyd collection