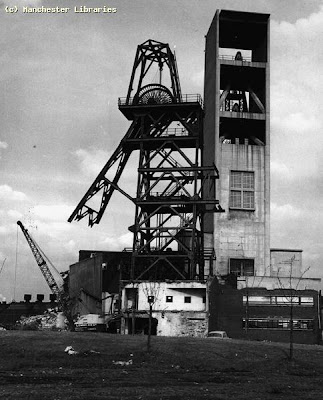 Now I was there when they demolished the winding gear at Bradford Colliery in 1973.

Well that is not strictly accurate.  It was there when we went out in the morning and gone when we got back.  It may even have been a few days before I noticed.  It was one of those places you took for granted.

In the same way we woke one Sunday to the dull persistent sound of some big engines being tested off towards Pottery Lane and again in the way of these things we only realized that it had been going all day when it stopped around tea time.

But then the area was still full of industry.  Just up the New Road was Clayton Aniline, with its tall chimney which belched out different coloured gasses at different times and turned the sky different shades.  There were the wireless works up by Philips Park, the canal, railway lines and countless small workshops. 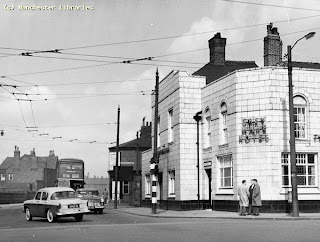 It is all very different now.  The Aniline went in 2007, most of the smaller industrial units vanished during the Thatcher years and that great sprawling block of deck access flats which was almost brand new when we arrived has gone without a trace.

They say you should never go back to places where you lived and were happy, and as I tried to get my bearings on what was the corner of the Old Road and where Grey Mare Lane stood I did have to agree.

Not that I hasten to add that this is some sort of nostalgic bit of tosh for a lost golden age.  True there was a real sense of community but few would want to return to houses which were past their best with damp walls sagging roofs and the occasional infestation.  Nor I think would there be any appeal in living next to shunting yards and watching clean washing get streaked with soot or live in the shadow of some great grimy factory.
Most who hanker for this never had to live it and never would. 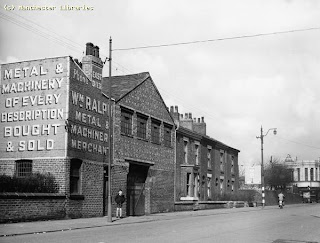 Now I know a little of what I am talking about because although we may only have lived there a year I spent a chunk of my early life in a similar industrial area.  The long rows of terraced houses hard by factories, mills and marshalling yards had been built in the 1780s and time had not been kind to them.  I fell asleep to the clunk of railway wagons in the nearby shunting yards, woke to the sound of steel shod boots of  men passing the door on the way to the local mill and knew it was dinner time by the siren from the same mill announcing the mid day break.

All of which is a belated introduction to David Hall’s book Working Lives: The Forgotten Voices of Britain’s Post Working Class.  It is according to the review “an oral history of post war industrial Britain,” covering “the lives of working people in the 1950s and 1960s.”** 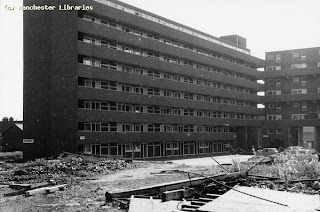 Here are stories of awful industrial accidents of Saturday night outs and mean streets dwarfed by mills, forges and collieries.

It is an industrial landscape and way of life that has in the main vanished and one that those of us who knew east Manchester will share with David Hall who came from Bradford. His was a world bounded by canals, railway line, gas and chemical works and  of factories and lived out under grey smoke filled skies to the incessant sound of noisy forges and engineering plants.

Now as I said nostalgia does nothing for me, but his book goes someway to recreating both my own childhood and that part of east Manchester I got to know just as it was being lost.  And is a real reminder of the transformation of industrial Britain.

Email ThisBlogThis!Share to TwitterShare to FacebookShare to Pinterest
Labels: East Manchester, Industrial landscapes, Manchester in the 1950s, One to read