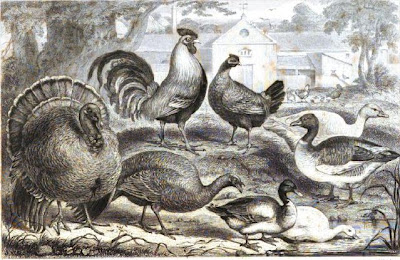 Pigs and chickens were common enough and many families aspired to keeping a family pig.

These were kept in the back garden or yard and could be fed on almost anything and would provide a family with food for almost the entire year.

As well as fresh pork there was salted bacon, cured ham, lard, sausages and black pudding.
Beyond its food value the dead pig offered its pigskin for saddles, gloves, bags and footballs while the bristles could be used for brushes and an average pig gave a ton of manure a year.

All of this was fine but often the pig became a family pet which made its killing just that bit harder.  Not that this halted the inevitable, which tended to be done in winter.  It was reckoned that the cooler months should be preferred given that in the words of the farming expert Henry Stephens, “the flesh in the warm months is not sufficiently firm and is then liable to be fly born before it is cured.”    So the traditional time was around Martinmas in early November which had the added advantage that cured hams would be ready for Christmas. 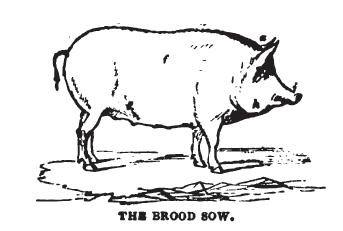 As for the slaughtering of the pig this was done by the local butcher who was often paid in kind, and could be a traumatic event for both pig and family.

Not that there was any set way to carry this out and stories abound of botched attempts all of which led Stephen’s to recommend that the pig be placed on a bed of straw and the knife inserted into the heart.

The event was very much a family affair with everyone pitching in to scrap the hair clean from the body by either immersing it in boiling water or pouring the scalding water over the carcase, and later salting down the meat.  Immediately after it had been killed it was hung and left for the night before being cut up.

It was a time consuming job to rub salt into the hams and not a pleasant one either.  First the salt had to be crushed from a salt block which was then rubbed into the meat.   A side could be anything up to four feet [1.2 metres] in length and special care had to be taken to rub the salt into the bone joints.  All of this left the hands red raw.  Nor was this the end of the process.  The meat then had to be soaked in water and dried before being wrapped in muslin and hung up.  Meanwhile some of the pork might be cooked up into pies and the blood made into black pudding.

The family pig was indeed an important part of the means by which many in the township supplemented their earnings.  But pigs were part of the local economy and both farmers and market gardeners would find keeping pigs a profitable undertaking.

As we have seen they could be fed on almost anything.  In winter this might be potatoes or turnips and in summer they could be left to graze in a grass field.  The going rate at market in 1844 for a pig was anything between 24s [£1.20p] and 30s [£1.50p].

Our old friend Henry Stephens calculated that two brood sows could produce 40 pigs between them and that retaining six for home use the remaining 34 could easily be sold at market.  So many of the smaller farmers and market gardeners in the township might well keep at least one sow and use it to supplement their income. 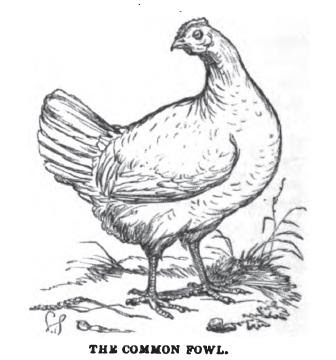 The same was true of poultry which existed happily enough in a back garden or farmers’ yard.  But I doubt that there was much to be made from selling the eggs.

Enterprising farmers and market gardeners might store up summer eggs to sell in the winter.  This involved smearing them with butter or lard while still warm and packing them in barrels of salt, oats or melted suet then transport them into the city or sell them to egg merchants who visited on a weekly basis.

For most in the township the chicken provided cheap fresh eggs.

Pictures; from the Bookk of the Farm Henry Stephens, Vol 11 1844

From THE STORY OF CHORLTON-CUM-HARDY, Andrew Simpson, http://chorltonhistory.blogspot.co.uk/2012/10/the-story-of-chorlton-cum-hardy-new.html
Posted by Andrew Simpson at 04:00

Email ThisBlogThis!Share to TwitterShare to FacebookShare to Pinterest
Labels: A new book for Chorlton, Chorlton farming