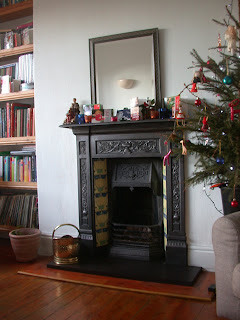 It’s that time a year again and last month John the Sweep came to do the business.  Now I say this time of year but strictly speaking we should have had it done in the summer and not just because everyone else is wanting a chimney swept around now but because it makes more sense to sweep it clear and leave the flue empty of soot for five months than clean it and just start putting the stuff back again.

Ah well 27 years employing a sweep and it is only now that I make that discovery.

And John is busy, even given that there are fewer now than a hundred years ago.  I suppose I shouldn’t be surprised across Chorlton and Whalley Range more people are returning to open fires and you can see why.

For a start they are a very comforting thing and with a regular coal man relatively cheap to run. But four decades ago it must have been tougher going.  The demise of the open fire in many homes and the switch to gas, electric fires and central heating might have made sweeps a thing of the past. 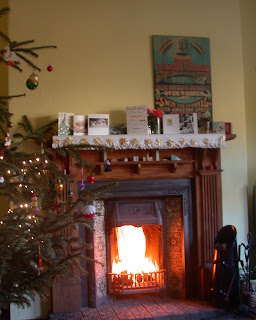 In 1911 there were sixty-three sweeps in the city and we had three.  Henry Thomas at number 3 Vicars Rd, Charles Morris, 12 Sandy Lane and Henry Thomas from 4 Brownhill Buildings, Sandy Lane.

Originally the job was done with brushes and I can still remember the sweep at home pushing the broom up and around the chimney, sweeping the soot clear until finally the brush appeared at top poking out of the chimney.

Now what I wasn’t quite prepared for was that John still uses a brush but of course today the actual business is done with a giant vacuum cleaner.  Quick, clean and pain free.

Like most people Joe and Mary Ann would have had their chimneys swept regularly, if for nothing else than to prevent the danger of a chimney fire which when I was growing up was still a feature of the winter.

But when they died and the house was sold John who bought it blocked up the fires having first ripped out the fireplaces, and we had to put them back.  The last went in only two years ago, which meant it had not been swept for thirty-five years, a point I chose not to share with John the Sweep, which was all to the good as the contents filled three bags in amongst which was one dead bird and accumulated other odd things.

Picture; from the collection of Andrew Simpson

* http://chorltonhistory.blogspot.co.uk/search/label/The%20story%20of%20a%20house
Posted by Andrew Simpson at 04:00