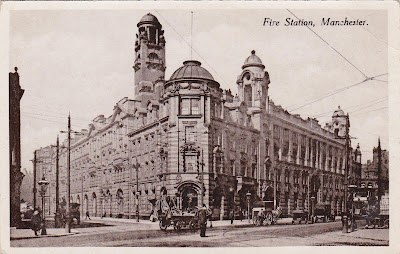 There are many of us who have a soft spot for the old Fire Station.

It was opened in 1906, designed by Woodhouse, Willoughby and Langham in red brick and terracotta and cost £142, 000 to build.

In addition to the police station there were a fire station, an ambulance station, a bank, a Coroner's Court, and a gas-meter testing station.

The fire station operated for 80 years, housing the firemen, their families, and the horse drawn appliances that were replaced by motorised vehicles a few years after its opening.   It remained the headquarters of the Manchester Fire Brigade until the brigade was replaced by the Greater Manchester Fire Service in 1974 and it closed in 1986.  None of which I knew as I sat eating my sandwich in Bert's cafe opposite or listening to a lecture on the role of government in late 19th century Britain in the Aytoun building of the College of Commerce..

And there it was.  In the absence of much from central government it was local politicians who were making their towns and cities better places to live.  As Sidney Webb said the “municipalities have done most to socialize our industrial life.”

And a resident of Manchester, Birmingham or Glasgow could benefit from municipal supplies of water, gas and electricity, travel on municipally owned trams and buses walk through a municipally maintained park while knowing his children were being educated in municipally run schools.

During the previous half century Manchester and all the great northern towns and cities had grown by leaps and bounds but the vital infrastructure which was necessary for a healthy and civilised life had lagged behind.

So there had been few planning or building regulations to prevent the worst excesses of slum housing, little in the way of clean drinking water and a total absence in some quarters of the city of adequate sanitation. 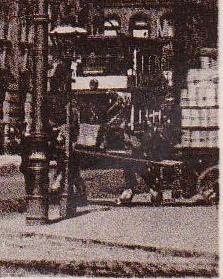 This picture must be from the first two decades of the 20th century, and like so many in the collection there is so much to focus on.  For me it is the large presence of the horse drawn vehicle. In the centre of the picture by the Policeman on traffic duty there is a heavy wagon, while just to our right a heavily laden one is emerging from the railway station, and a little further up London Road is the horse drawn taxi.

But there are those motor cars, only two of I grant you but in time this petrol engine vehicle will see off the horses and the tram.

Picture; from the collection of Rita Bishop, courtesy of David Bishop.

Email ThisBlogThis!Share to TwitterShare to FacebookShare to Pinterest
Labels: Manchester Fire Station, Manchester in the 1900s