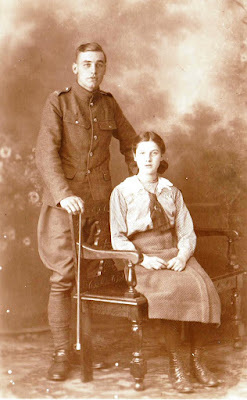 December 15 1915 seems to have been a quite day on the Western Front.

The Battle of Loos had ended in October with the loss of over 59,000 British soldiers and with the onset of winter campaigning had come to an end.

All of which makes me wonder just how Gunner William Watson of the Royal Field Artillery was killed on that day in December.

The official records list the event but give no detail and I have yet to research the war diaries for his unit for December 1915.

Earlier in the month there had been a mix of activity with British air raids on German positions and on December 10 “an expensive morning ‘Hate’” when according to the Manchester Guardian 3,000 shells had been fired in two and half hours.

The paper reported that  “the guns on both side have been very active again during the last few days, despite the adverse weather conditions. 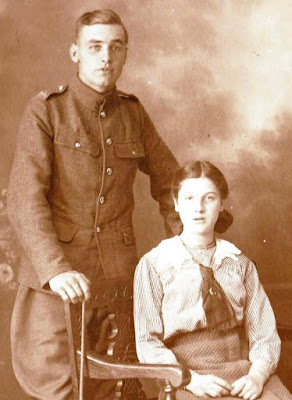 In reply to the early morning bombardment of our artillery on the German positions in the vicinity of Pilkem a few days ago, the enemy retaliated with 3,000 shells, fired between 10.30 a.m. and one o’clock ....... at every point of the front artillery duels have been of daily occurrence.....”*

So perhaps this was how Gunner Watson died but for the time being I have no access to his records and only know that he had enlisted at Preston.

I doubt that I would have even known this much if it wasn’t for the photograph of the young William which was taken with his girlfriend his sister and which someone has written on the back, “In memory of William w Watson kia 15/12/15 from Finland Road Edgeley Stockport, 19 Royal Field Artillery buried in France.”

He had been born in 1897 in Stockport and the family seem to have moved around the town.  In 1911 they had been in Middle Hillgate and just before his death were living in Finland Road. So far I haven’t been able to discover much more about the family.  His parents had been married in 1900 his father was a butcher and William’s sister was two years younger.

It’s not much but it is a start and with time I might find his obituary and that will lead to more.

As for Wednesday December 15th it also seems to have been a quiet day across Manchester and Stockport.  The papers were full of commodity prices, stories of battles far away in the Balkans and on the Eastern Front and the opening of the film The Story of an Avenger at the Grosvenor Picture Palace at All Saints,  Manchester.

It was a “TRADE SHOW” with one performance at 11 am, and like the story of Gunner William  Watson the film has been equally elusive.

Email ThisBlogThis!Share to TwitterShare to FacebookShare to Pinterest
Labels: David Harrop, Stockport, Stockport in the 1900s, The Great War