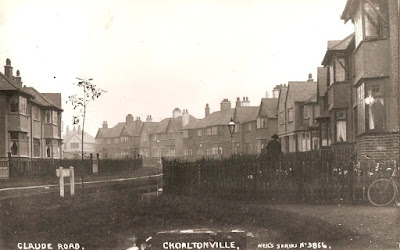 Now I know there will be those who fail to see what there is in this picture of Claude Road from Brook Road sometime around 1914.

And if I am honest it is hardly a page turner, but then that is the point.  It is an ordinary scene of a bit of Chorltonville which was rarely photographed.

Like so many of these pictures of the period I am struck by the uniformity of the curtains at the windows of the houses.

The ‘ville is still fairly new and the trees have yet to grow to any size and the hedges are still dwarfed by the fence. 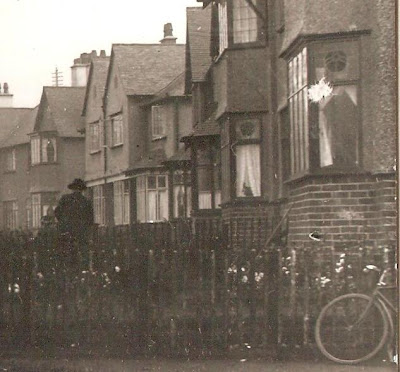 What does make the picture a little more interesting is that it is one of a commercial series and may originally have been produced with the hope that the residents along Claude Drive would buy a few copies.  This was pretty much standard practice.

It may even be that the photographer was the same man who trawled the ‘ville in the spring of 1913/14 taking a lot of pictures.  They were then either sold to different postcard companies or perhaps acquired by them.

Picture; from the Lloyd collection

Email ThisBlogThis!Share to TwitterShare to FacebookShare to Pinterest
Labels: Chorlton in the 1900s, Chorltonville