Now I have never been a fan of roundabouts and said so yesterday in a short piece, about all things that go round and offer amusement to lots of people.* 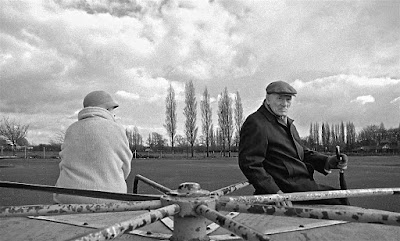 So despite them making me feel ill, so many people like them that a new series has been born.

At first I was going to limit it to roundabouts, but I rather think it will be about all playground features, from the seesaw to the rocking horse and on to  the slide and the swing.

This is one of those very simple roundabouts which were still there in the 1984 in Longford Park.

The photograph was taken by David Dunnico and I like it, not least because it offers up that promise that playgrounds and the apparatus are not just for the young.

So, if there are people with pictures, or stories of the Corporation Rec and the things they played on .... just post them over.
You can see more of David's work at https://daviddunnico.wordpress.com/

Picture; merry go round, Longford Park, 1984, from the collection of David Dunnico, https://daviddunnico.wordpress.com/

*All that glitters and moves .......... the roundabout, https://chorltonhistory.blogspot.com/2018/05/all-that-glitters-and-moves-roundabout.html