Looking for Mr. Henry Charles Digby of Eltham ……… you go looking for one …. and you find two

I am the first to say that history is messy and just when you think you have got a story from the past just right, the past throws you a wobbler. 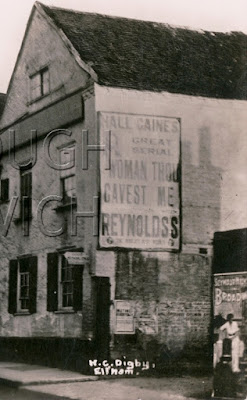 I first came across a picture of the Old King’s Head in the catalogue of Greenwich Heritage Centre, wrote a story on the pub and moved on, fully intending to go back and write some more.

Of course, I never did, but after reposting the story  yesterday, I was drawn back by the name of the postcard publisher, who was a C.H. Digby of Eltham.

Finding Henry Charles Digby proved relatively easy.  He was born in Walworth in 1854, and was living in Camberwell in 1891, working as a clerk.

All text book research, and the connection with printing, made the story of the postcard publisher.

Except that also in Eltham, at the same time was another Henry Charles Digby.  Both appear on the electoral rolls from the 1919 onwards with the second Mr. Digby living at Footscray Road and later Southwood Road.

What distinguishes them is that my first Henry Charles was married to Rachael, while the second was married to Beatrice Deborah, but both were living in Eltham with their respective wives from 1919 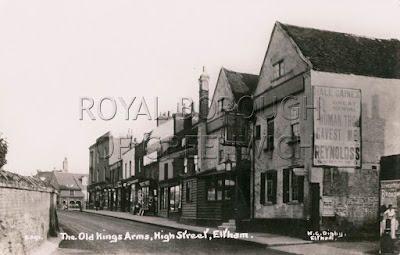 At first I missed the glaring fact that there were two wives, and two different addresses, and only spotted that something was not quite right, when one Henry Charles died in 1936 and the other was still alive two years later.

So, there remains a mystery, but it will be one that someone will help solve, perhaps coming up with more picture postcards, marketed by one of our Mr. Digbys, and locating both on the 1911 census which I have failed to do.

*At the Kings Arms waiting for Fred Wisdom to pull a pint, https://chorltonhistory.blogspot.com/2020/05/at-kings-arms-waiting-for-fred-wisdom.html?spref=fb&fbclid=IwAR3GYAPWiZaK8PRGUZ0kbHOnpuKKzx3mmp9r52SxI6-alog4zdsJrZeKzHU