Now you can never have enough of a good picture so I make no apologies for returning to this one of Court Yard which dates from around 1910 and is from the collection of Kristina Bedford.*

Most of what you see has long past out of living memory.

The Congregational Church away in the distance had been opened in 1868 and was demolished in 1936 and the site was redeveloped by Burton’s where I bought my first suit and later still my first grown up overcoat.

The house next to the church was swept away in 1905, demolished when the southern end of Well Hall Road was cut thereby making the route north towards Well Hall and Shooters Hill a tad quicker and more direct. 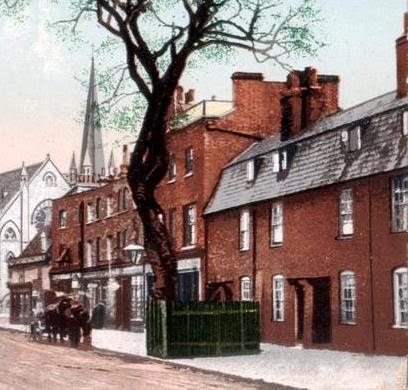 But the consequence was that the peace of the church was invaded by the noise of trams, carts and later motor vehicles all of which led to the relocation of the church and in its place the still very impressive building which has now become a McDonald’s.

And on the rare occasions I have ventured in there I still miss the wooden cabinets full of shirts and ties, the racks of ready made jackets  and trousers and the catalogues offering all manner of fashionable made to measure suits.

Still someone will mutter such is progress and I guess that also sums up the developments to the left of our picture, which saw the properties pulled down for the Grove Market.

I wish I could remember these for they would still have been standing when we first came to Eltham but they have passed from my memory and I guess in time I will be hard pressed even to remember the site as it was from the mid 60s until recently.

So I will fall back on the historical record and stories of that row to our right.

I have written about walking past the properties already.

And it was here that Annie Morris lived when our photographer pitched up on Court Yard.

In her time she had lived at numbers 17 and 25 Court Yard and before that in Ram Alley behind the High Street.

She was born in 1848 at 4 Pound Place, and almost her whole life was spent in here Eltham.

She was a cook and may have worked for Captain North at Avery Hill and through her life we have a snap shot of what Eltham had been and what it was becoming.

Her grandfather had set up a farrier’s business in Eltham in 1803 on what is now the Library, and “attended the old Parish Church in his leather apron.” 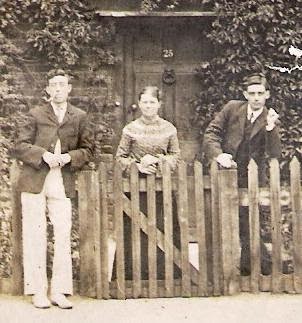 Hers is a fascinating story which takes us back to an Eltham that even more than our picture has vanished.

And yes that is a trailer for more rural Eltham stories along with a few more about Annie.

Picture; Court Yard in 1910 courtesy of Kristina Bedford, from Eltham Through Time,  and  of Annie Morris outside her house in Court Yard from the collection of Jean Gammons.