Peel Park, a mistake by Tuck and Sons and a trip out to an orphanage in Tottington

Now I don’t suppose Delia or her sister Gertie gave a seconds thought to the glaring mistake made by the picture postcard company which marketed this photograph of Peel Park at the turn of the last century. 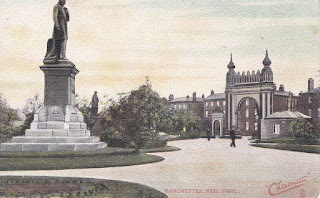 The company in question were one of giants of picture postcards with offices in New York, Paris and London, a catalogue of images that covered pretty much all of the world and offered up a picture for almost every event, from Christmas to high summer and including the pin ups and music hall stars of the period and much else.

The company was Tuck and Sons and the mistake is a big one which will not surprise some, and just confirm for others the ability of companies south of Altrincham to get the North all mixed up.

Nor was it the first time Tuck and Sons had done so.

As cards go the quality is not wonderful and may have something to do with the image having been retouched and then “colourized.”

But perhaps it was a small compensation for Gertie who according to Delia had “not had much time to take you about when you were here.”

Even more so because Delia thought that it was “quite a change for you to be with us.” At first I thought this might be explained away by Gertie’s address which was the Convent Holly Mount Tottington near Bury.

But was confused by a reference to “my love to Tilly and Geff,” but a search discovered that Holly Mount was an orphanage opened in 1888.  By 1897 it could "accommodate up to 216 girls aged from 4to 13 with the Boards of Guardians paying 5 shillings a week for each girl they placed there.

By 1930 the number of girls had risen to 300 aged from 3 to 16 with the weekly charge being 14 shillings.  Although Holly Mount was primarily a girl’s establishment, boys were also accommodated.”* 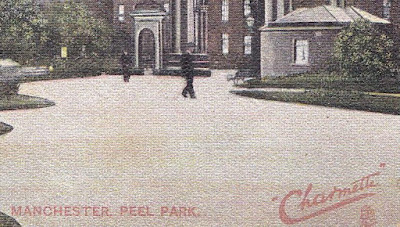 Now there is more but I will just direct you to follow the link to the Holly Mount site.

But in time I might go looking for Miss Gertie McCabe and who knows what might turn up.

And for any one still mystified at the mistake the clue is in the right hand corner.

Picture; Peel Park, circa 1900, marketed by Tuck & sons,  from the collection of David Harrop

Email ThisBlogThis!Share to TwitterShare to FacebookShare to Pinterest
Labels: Raphael Tuck and Sons Ltd, Salford, Salford in the 1900s