Historians will look back on the rapid transformation of the city’s skyline and debate the point when those towers started to change forever the character of Manchester. 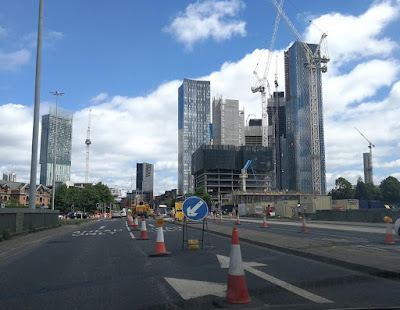 The date it all began is also open for argument with some going for when Sunlight House was built, with others offering up the CIS building, and much later the Beetham Tower.

Of course the early 20th century saw the Refuge Building and before that the steady expansion of the Royal Exchange and earlier the new Town Hall.

But as big and magnificent as all these were, they were still on a human scale which can’t be said of those towers which dominate the skyline and can be seen miles away.

And I think Cathy Robertson has caught their overbearing presence.

Email ThisBlogThis!Share to TwitterShare to FacebookShare to Pinterest
Labels: Cathy Robertson, Manchester in the 2000s, Pictures from Owen Street