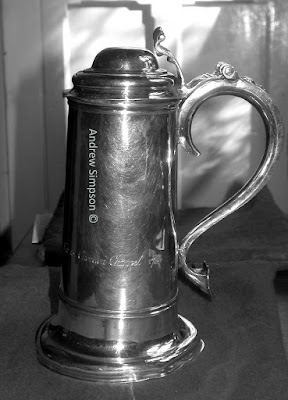 It is for me one of the most exciting things about crawling around in the past and it is when you get to touch something you have written about.

It is as if the very act of holding it in your hands links you to every other person who has ever picked it up.

Now over the course of the last few years I have come across many documents, pictures and things which came my way as I wrote the book*.

And as I promised to run stories about how the book was written this seemed a good moment to start.

The first is  the silver tankard donated to the church in the 1730's and used and seen by congregations in the old parish church until well into the 20th century.

The second is the minute book of the meetings which ran the township during the 19th century.

They cover the period 1839 through to the 1850s and document who was appointed as the officers including the constable, those responsible for the highways and assessing the rates as well as decisions on how our money should be spent.  There in the handwriting of Edward Smith are the names of the men who sat in the old school house on the green and carried out the business of local government.

I suppose it is a little daft but each time I use the book I am conscious that perhaps only three or four other people have turned its pages since it was written 160 years ago which is a great shame because here are the voices of the committee trying to grapple with the mundane and the deadly serious.

In 1850, James Higginbotham argued that because the services of the constable had not been called on during the year before “there should be no Constable returned for appointment this year.”

And when the decision was repeated in 1853 it was as James White said because “the Township is sufficiently protected by the County Constabulary that there be no special constables returned.” It was a decision which must have sat uncomfortably with many who reflected that the previous decades had been marked by all manner of crimes and disturbances.

And only went to underline the serious loss of money from the Committees' own accounts just two years earlier.

Neither can be said to have great monetary value but are a wonderful link with our past.  The first of a series of short posts reflecting on what went into the new book.

Picture; of the tankard from the collection of Andrew Simpson, 2011