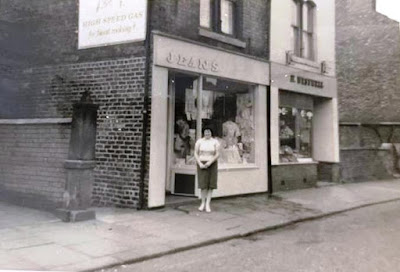 Yesterday I featured Paul England’s dad outside his shop on St Clements Road and today I am with his mum on Beech Road.

Mrs England ran the wool shop just by the cut that led off to what is now Crossland Road.

It is another of those snaps of Chorlton which pay careful attention.

Mr Westwell was still next door in his grocery shop and may still have had the large painted sign on the upper frontage which proudly announced “Just Arrived” with a picture of a trawler and a smiling salmon.

And not to be outdone on the side of Mrs England’s shop was a hoarding promoting “High Speed Gas.”

Now the products advertised might have changed over time but that hoarding has lasted a full half century.

Not so Joel House which dated from the 1860s and sat back from the road, protected by a low wall which is just visible in our picture.


Picture, shopping in Chorlton in the 1960s, from the collection of Paul England
Posted by Andrew Simpson at 03:30

Email ThisBlogThis!Share to TwitterShare to FacebookShare to Pinterest
Labels: Chorlton in the 1960s, Snaps of Chorlton