I have fond memories of Ashton-Under-Lyne.

It was where I lived for three years in a small terraced house off Penny Meadow and it suited me just fine.

It was after all about as far away from south Manchester as you could go and the life of a student which had been my lot for four years.

But above all for someone interested in 19th century history it had the lot.  Here were the mills, a canal and a fine market hall and the old PSA building.*

Now I know that if I had washed up in Oldham, Rochdale or any one of a number of the mills towns in the region I would have found something of the same, but Ashton was where we lived and it was Ashton’s industrial and social past that we explored in the mid 1970s.

It was a place which really came into its own during the 19th century.  So while it had been a market town since 1284 it remained a small place until the Industrial Revolution.

Its population in 1775 was about five thousand and according to one account the town was contained in “four narrow dark streets formed by mean looking dwellings.”** 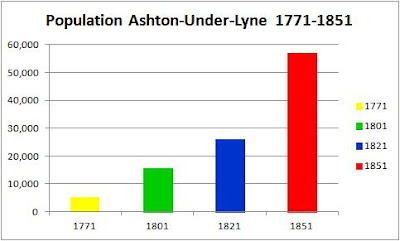 But during the last quarter of the 18th century and the first four decades of the 19th it rapidly expanded as the textile industries were developed.

So the population increased and in just fifteen years from 1827 “the place has been rapidly augmented; .... the banks of the canal and the Tame are now lined by numerous streets; the area betwixt Old Street and Charlestown is nearly built upon, and a portion of it forms  a spacious Market-place, on the north side of which is erected an elegant Town Hall; the fields formerly bordering on the north of the Old Cross have been transformed into street avenues; the east side of the Rectory has received a large accession of habitations, the west side of Oldham Road is become a portion of the town; and the vicinities of Henry-square and St Peter’s Church abound with edifices.”***

It is a story which has been told in part but for me one of the most excellent and enduring accounts is that of Victorian Ashton which as the Preface says, is not so much a history of Ashton in the 19th century but “a collection of essays dealing with aspects of life at the time, and a record of what remains of the period today.”****

I bought it back in 1974 when it was first published and regularly go back to it. It includes articles on 19th century housing, the Churches and Chapels, leisure and Industrial Archaeology along with descriptions of Chartist activity and individuals like Hugh Mason.

In the almost forty years since the publication of Victorian Ashton, the town has changed a lot and some of the places featured in the book will have gone.

Rereading the section on the Industrial Archaeology of Ashton-under-Lyne by Owen Ashmore is to be reminded of just how much of the economic and industrial landscape has altered in the last four decades.

Likewise the account of the town’s 19th century housing by Sylvia A. Harrop is a wonderful record of what was and still is.

So I am rather pleased that I still have my forty year old copy of Victorian Ashton, and equally pleased that it is still available from Tameside Local Studies and Archives Centre.*****

What is all the more remarkable is that while I paid 75p for it in 1974, it still retails for just a £1, which I reckon has got to be a major incentive to get a copy.

Pictures; Victorian Ashton, courtesy of Tameside Local Studies and Archives Centre, population increase taken from Nineteenth Century Housing in Ashton, Sylvia Harrop, Victorian Ashton, and detail of the town centre from the OS map for Lancashire, 1841-54, courtesy of Digital Archives, http://www.digitalarchives.co.uk/ extracts of Ashton in the 1830s from Butterworth Edwin, A Historical Account of the towns of Ashton-Under-Lyne, Stalybridge and Duckinfield,